Where to find Joey at Dirty Docks and Believer Beach

NPCs have been an integral part of Fortnite ever since the game took baby steps back in 2017. They add a fresh aspect to the game as players get a chance to interact with them, often rewarding the latter with Exotic weapons in exchange for Gold Bars.

Fortnite Season 7’s Battle Pass trailer showed several characters, including Dr. Slone, Rick Sanchez, and Guggimon. Gamers then realized that some of them would be a part of the NPCs in the new season.

Fortnite Season 7 NPCs could be hard to find unless loopers are aware of their spawn points on the island. Recently, they have shown immense curiosity to discover the location of Joey NPC.

I just spent 50 minutes looking for a stupid fortnite npc and I still can’t find him. Is Joey glitched?? @FortniteGame I legit can’t find him at all

Fortnite Season 7: Joey spawns at two locations on the island

The Joey NPC in Fortnite Season 7 is a bit different from others. This particular character spawns at two different locations. Gamers will be able to locate him near Believer Beach as well as Dirty Docks.

In Dirty Docks, they can encounter Joey NPC in the northern part of the POI. Gamers will be required to enter from the northernmost entry, and on the left-hand side, they will encounter a small shed-like structure. Joey NPC is located inside this small shed.

Interacting with this NPC will allow gamers to buy the Epic Assault Rifle, which will cost 100 Gold Bars. Joey NPC in Dirty Docks has two quests as well. Accepting and completing them will reward Gold Bars in Fortnite Season 7. 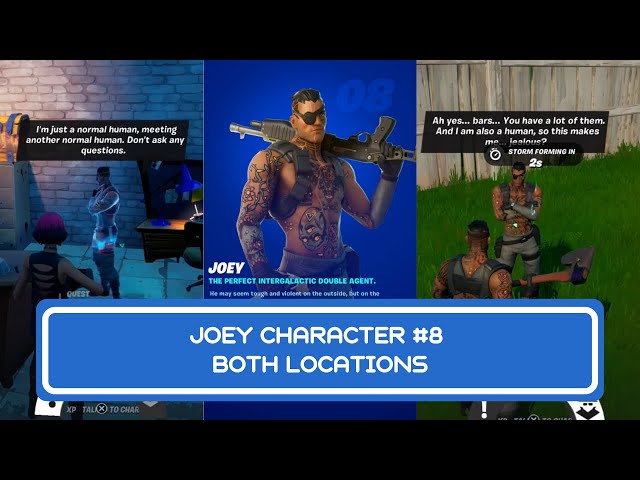 Apart from Dirty Docks, gamers can also encounter this NPC near the Believer Beach POI. They must navigate through to the southwestern part of the POI.

Joey NPC spawns near a small shed that is surrounded by a handful of caravans.

Gamers might think that the NPC will offer different weapons and quests since the spawn points are different. However, at both locations, Joey offers the same Epic weapon and the same set of quests.

The two spots of this NPC have raised some questions in the Fortnite community. It is speculated that since Joey is a double agent working for both the IO and the Alien faction, he has two different locations in Fortnite Season 7.

How to get the free OnePlus Fortnite Bhangra Boogie emote