Where to dance near a lit campfire in Season 7

A healing method in Fortnite for players who’ve had their health pool chipped at, campfires rest all across the map in certain locations. These campfires can save players in a pinch when running from a finished fight or an accidental fall by providing a steady boost of health.

Campfires can typically be found outside surrounded by benches, camping gear, rocks and other structures of that nature. There are dozens of campfires scattered across the Fortnite map for players to complete the ‘dance near a lit campfire’ challege.

Here’s an approximate list of all Fortnite campfire locations.

Campfire locations across the Fortnite map

With almost 100 campfire locations, it’s easy to spot any of them to complete the challenge, as every named location has one close by. Several campfires can be found in locations like Coral Castle, Believer Beach and Misty Meadows for players to dance near for the challenge.

There are 8 campfires littered throughout Fortnite’s Coral Castle for players to find, 4 of them lying near the left land mass. The other 4 are more spread out, with 2 in the ruins and 2 on the right and upper land masses.

3 campfires sit on the shore of this alien welcome party location for Fortnite. They’re in a straight line on the beach, so keep walking across the sand to find them.

South of Believer Beach, there are two campfires that rest near the edge of the map to the west of Holly Hedges. 1 is on the beach to the southwest, 1 is near an ‘H’ shaped building to the northwest.

Weeping Woods holds 5 campfires throughout the cluster of trees it hosts. 3 rest west of the river that splits the location and the other 2 rest on the east side next to each other.

The mucky water location contains 4 campfires for Fortnite players to discover in its boggy terrain. 3 are scattered to the west of the main facility, 1 of which lies near the shacks on the edge of the map, and 1 right below the clustered buildings.

This named location holds a single campfire right under the ‘N’ and ‘E’ in Boney on the Fortnite map. It shouldn’t be hard to find if players have a keen eye.

Pleasant Park has 1 campfire right in the center just to the left. There’s also a lone campfire between Pleasant Park and Boney Burbs near the alien splattered terrain close to the river.

The octogon shaped location on the map has 4 campfires near it. 2 of these lie close together on the southeast side, while the other 2 are northwest.

The northernmost named location on the Fortnite map has 6 campfires in or around in a flattened ‘U’ shape pattern. 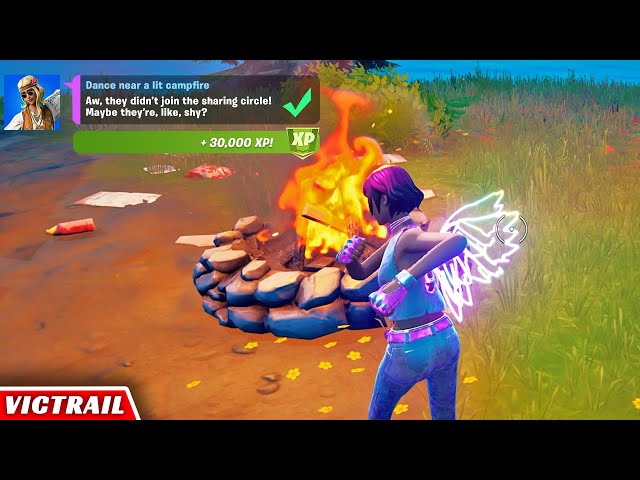 These three locations form a triangle that traps 8 campfires in or between them. Each holds a single campfire in their grounds while 4 others make a straight line pointed at Dirty Docks that starts at the apple farm just above Corny Complex.

The final campfire sits on the 90 degree angle terrain near the river between Corny Complex and Dirty Docks.

The alien crater in the center of the map is home to 8 campfires that are a stone’s throw away from it. 3 of them sit in the purple alien biome and 5 are sprinkled around it, 3 of which are to the north.

While these locations don’t hold many on their grounds, there are 10 campfires near them, 7 of which are to the west of Lazy Lake scattered through the hills between it and the IO Tech Base near it.

The other 3 are between Lazy Lake and Retail Row – 2 that are far to the north of them and 1 that is directly east of Lazy Lake.

These two named locations in Fortnite connect to 14 campfire locations combined. 4 are in Misty Meadows itself, 4 are in the hills to the southwest of Misty Meadows, and 4 lie near water in a circle around Misty Meadows.

The last Fortnite campfire sits right in the middle of Catty Corner on the south side of its location.

This isn’t a named location on the Fortnite map, but 14 campfires are lined up across the edge of the map near the water. The first in the south starts to the west of the lowest island and starts the trail that stretches along the coast almost until Dirty Docks.

2 of the 14 lie more inland near the snowy hills at their base but are still close to the arch on the southeast edge of the Fortnite map.