Where To Beskar Steel In Fortnite

The widely awaited Mandalorian skin will be unlocked immediately for Season 5 Battle Pass owners. Still, they will need to complete quests and grind for XP to access all available cosmetics and variations. Epic Games’ relationship with Disney seems to be far from over, as shown by the huge Season 4 crossover between Fortnite and Marvel.

Season 5 also adds additional features such as quests for players to complete, as well as a new currency that can be used to purchase improved weapons, weapon enhancements, and even a personal bodyguard NPC. The Beskar questline is one of the questlines that players can complete if they want to access one of the Mandalorian’s alternate models.

This quest is divided into eight pieces, each of which rewards players with a piece of Mandalorian Beskar armor. Finding a Beskar Steel ingot Deep in the Belly of the Shark is one of the early season quests players will complete.

Many Fortnite fans will be able to guess where they can find this item based on the name alone, but if they don’t, it’s not difficult to find. When training on these challenges, players can use the Mandalorian skin to ensure that they log properly. In Fortnite Season 5, here’s how to hunt the Beskar Steel in the Shark’s Belly.

Players must locate The Shark, as the quest’s name suggests. This is a tiny island just north of Coral Castle in the extreme northwest corner of the map. On the island, players can come across a shark-shaped rock formation. 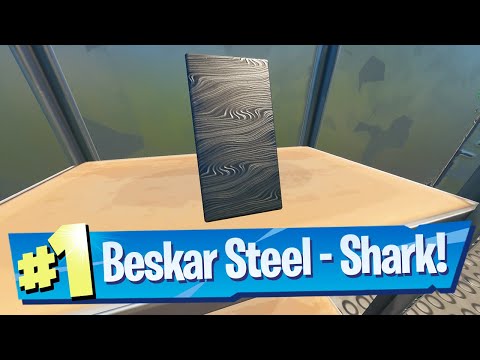 It’s best not to land too close to The Shark. The region is likely to be packed with opponents, as the season has only just begun, and The Mandalorian is already a very common character and skin. If players land on the island or nearby, they can grab a weapon or two, as well as any ammunition, and approach the area equipped for something.

Plays can reach The Shark’s mouth and proceed to the second floor until the area is open. There are a few options for getting up there, but the most straightforward is collecting materials and building stairs or a ramp. They’ll need to locate the vault until they’ve reached the second level. The door should be slightly ajar, allowing the player access.

The Beskar Steel ingot can be found on a shelf near the Porta-Potty in the vault’s rear. Picking it up would give the Mandalorian’s left thigh a Beskar look. They will take it out of their locker at any moment. Other searches for the Mandalorian’s Beskar armor’s remaining parts include: