When will The Foundation Outfit arrive in-game?

The Foundation was shown being encased within the Zero Point in the Battle Pass teaser, yet Epic Games has not yet confirmed if The Foundation Outfit will be coming to the game this season.

Much like how we didn’t get Agent Jonesy last battlepass even though he was introduced then, it would seem fairly plausible, that the same thing would happen with The Foundation skin. It’s a way for Epic to build and maintain hype. Hope I’m wrong though. pic.twitter.com/EmbBEcfKYS

However, one Twitter user thought the situation was like last season’s battle pass where Agent Jonesy’s skin was teased but never showcased. The Foundation Outfit will more than likely be coming to Fortnite, perhaps towards the tail end of Season 6 or at the start of Season 7.

In the files there are 2 versions of him
One is EVENTONLYNOTFORSTORE, which means he’ll be in the shop

This would make a lot of sense as in-game challenges related to The Spire have been ramping up, and more are yet to come. These quests are surely not pure coincidence, and Epic Games is definitely building up to something huge.

Will The Spire Challenges unlock The Foundation Outfit?

During The Spire Challenges, players will interact with Raz, who mentions that he’s been working on ways to enter the “Spire’s inner sanctum.” It is undoubtedly a reference to the sphere on top of the Spire, in which The Foundation has been encased.

Players who complete The Spire Challenge throughout the season may get the Foundation Outfit as the final reward, or it may even be unlocked in the item shop towards the end of the season.

Take my damn V-Bucks, Epic, and give me the Foundation and Fortnitemares Shadow Midas as a style for Midas already!

Here’s a video for a more detailed look at The Foundation Outfit: 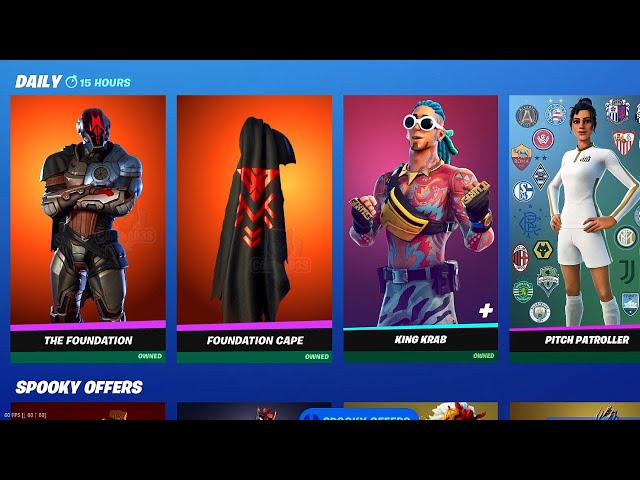 Who is The Foundation?

For the uninitiated, The Foundation is the leader of The Seven. Agent Jonesy betrayed the IO to contact The Foundation to help him save reality and stop the Zero Crisis in exchange for information about Geno and The Sisters.

It goes without saying that following the Zero Crisis event, The Foundation will play a huge role in Fortnite Season 6 and perhaps even Season 7. The players are yet to meet the rest of The Seven. But with their leader now trapped within the Zero Point, members of The Seven may come to his rescue.

Dwayne “The Rock” Johnson was earlier rumored to be connected to The Foundation after releasing a video on Instagram. Despite the massive hype, Epic Games is yet to confirm the same.

There’s no telling when The Foundation Outfit will be available in-game. Still, with The Spire Challenges ramping up, it’s safe to assume that the publisher is preparing players for a major in-game storyline event.

Fortnite Hidden I Location Guide: Where To Search Letter I In Hide And Seek Loading Screen