What happens when Fortnite Glyph Master Raz meets other bosses?

Ever wondered who would win in a duel vs Glyph Master Raz in Fortnite? Well, as it turns out, there are content creators who are as curious as players and willing to go the extra mile, or in this case, five hours to get an answer.

Fortnite content creator By Post went the extra mile to figure out who would win the duel between Glyph Master Raz vs hirable NPCs in Fortnite Season 6. The process was long and arduous, and it took several tries to actually win. As it turns out, Glyph master Raz can in fact be defeated by NPCs alone.

So without any further delay, let’s take a look at how By Post pulled off this feat in Fortnite.

Hiring nine NPC’s in-game all at once is nothing short of a miracle. It’s not impossible but not entirely feasible without practice. To begin with, players have to hire nine NPCs which are quite scattered across the map.

Related: How to eliminate opponents by hiring all NPCs

Each team player will have to hire three NPC’s per head to maximize time usage before the circle starts closing in. Each of the three squadmates will have to hire NPC’s along the way and regroup at a common sight on the map. In this case, it was The Spire. Each NPC costs 95 gold bars to hire.

It’s time to meet the NPCs

The first group of NPCs includes Lara Croft, Stage Slayer, and Crustina. They are located at Stealthy Stronghold, FN Radio, and Pizza Pit.

The second group of NPCs includes Deadfire, Cluck, and Gutbomb. They are located at Sheriff’s Office, Primal Pond, and Durr Burger.

The third group of NPC’s includes Power Chord, Bandolette, and Big Chuggus. They are located at Apres Ski, Flushed Factory, and Shanty Town.

Did the NPCs manage to take down Glyph Master Raz?

As mentioned before, it took a few attempts for the NPCs to defeat Glyph Master Raz. The NPCs in Fortnite are not the brightest, and they tend to not function as intended most of the time.

The bright side; however, is that NPCs are bullet sponges. They can soak up a lot of damage before going down. In this example, they did need to absorb a lot of damage as Glyph Master Raz not only attacks using his Explosive Bow (Mythic) but can also steal health from others to replenish his own.

This method is extremely fun, and players should try this out. However, be warned, getting the NPCs together will be a daunting task, and it’ll be even harder to have all nine NPCs attack Glyph Master Raz in a coordinated strike.

All said and done, players who are bored of playing regular Fortnite should take some time out and try to defeat Glyph Master Raz using only NPCs. This challenge took By Post five hours to complete and should keep players entertained for a while. 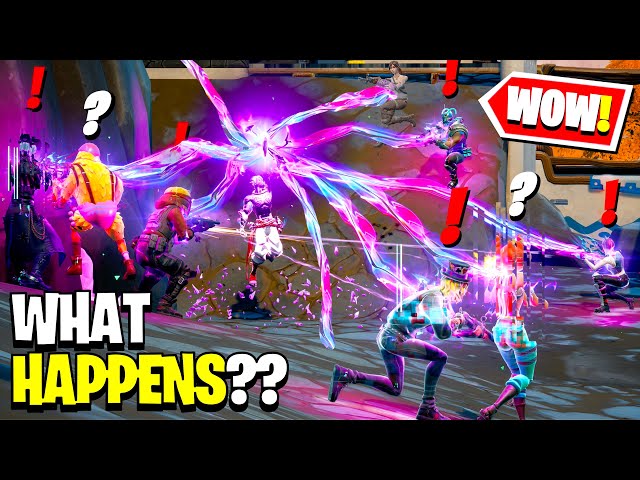 Also Read: Raz’s Explosive Bow vs Unstable Bow – Which is the best bow in Fortnite Season 6?