The most toxic Fortnite Season 7 strategy ft. Ninja, SypherPK, and others

Fortnite Chapter 2 Season 7 is out now, and aliens have invaded the island. Under Dr. Sloane’s leadership, players will have to gang up to help protect the island from enemies of the unknown.

The new season has added a load of content to Fortnite. Players have a new favorite hero, Rick Sanchez, from the popular animated show Rick and Morty. Furthermore, Superman is going to be released in-game later in the season.

Aside from outfits, there are also new alien-themed weapons and new POIs to check out on the Fortnite map. However, perhaps the driveable UFOs are the most toxic element of this season.

Besides transit, loopers can use these foreign ships to attack and abduct players. They also allow players to lift objects and transport them anywhere on the map.

Immediately after Season 7 was launched, UFOs had to be given a soft nerf because they started getting on the nerve of players who chose to stay on the ground during fights. UFOs would come out of nowhere and wreak havoc, breaking all their builds with a single shot.

Even with the nerf, Benjamin “Dr. Lupo” Lupo, Ali “SypherPK” Hassan, Tyler “Ninja” Blevins, and Jack “CouRageJD” Dunlop got together in a full stack and demonstrated how dangerous UFOs could be if they were in the right (or wrong) hands. 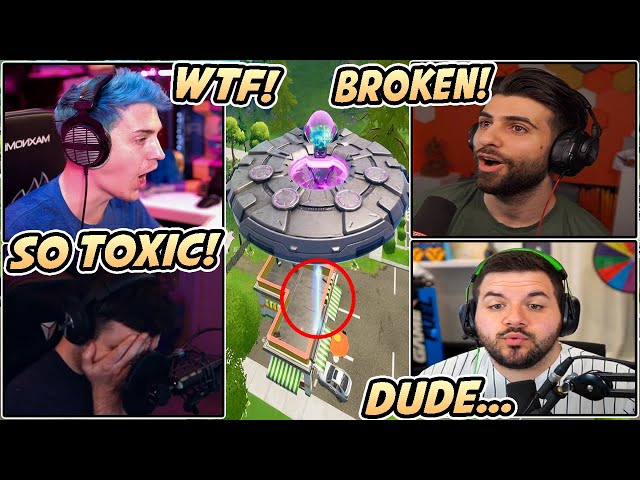 SypherPK demonstrated the most toxic strategy to eliminate players while scouting on a UFO. Using the abduct ability in the final circles, he broke the builds over the enemy and, after capturing them with the beams, took him out into the storm and left him to die.

The player was simply helpless and submitted to his fate and did not bother to shoot back.

All four Fortnite streamers adopted a strategy to barrage their enemies on the ground with energy charges from UFOs. Though the fire rate was reduced on the aircraft, if four players take turns at another team, there is hardly any way to survive.

They even realized they were toxic towards the other players in the lobby. Dr. Lupo cheekily called UFOs “worse than mechs” after their fight, referring to the 1000 HP robots that were similarly toxic back in the day.

Surprisingly, none of the enemies chose to shoot down the UFOs. These ships have very little health, and a single clip from an assault rifle is enough to bring it down. However, with pros, there is only so much other Fortnite players can do to save themselves.

How to find the hidden ‘T’ for Fortnite Week 4 Missions