Although the predictions of Coral Castle being blown up didn’t come to fruition in the Fortnite 17.10 update, players still received a lot of explosive surprises in the form of the Summer Cosmic party, POIs within the Mothership, and a whole lot of new game features.

Yet again, leakers have discovered some amazing things that are happening both in-game, as well as in real life, alongside some information that sheds light on the much anticipated Inflate-A-Bull item that is yet to be added to the game.

Also Read: Fortnite 4th of July event – Skins, rewards, and everything else players can expect this year

1) The Mothership is on the move, and fast!

Although most players are aware of the fact that the alien Mothership is returning to the island, no one could have imagined the speed at which that would happen. Several leakers and Fortnite content creators began recording the movement of the Mothership and were shocked to realize how much it was moving in a day.

In addition to the Mothership moving, the sheer scale and size of it are massive. As seen in the above Tweet, it covers a surface area far larger than the island; which could explain why it can abduct and hold so many POIs from earlier seasons.

Irrespective of everything, it’s still not known why the alien invaders have come in the first place. However, judging by its flight path, the Mothership is circling the island from left to right, in an anti-clockwise manner.

Here’s a video of the same: 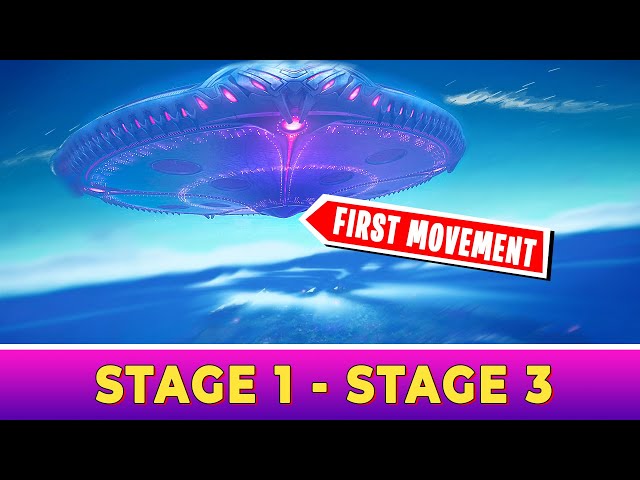 Keeping true to the whole alien theme, Epic Games is still teasing a yet-to-be-added item called the Inflate-A-Bull. Resident Fortnite leaker iFireMonkey sheds some much-needed light on the item and its functionality.

Here are some renders of what the upcoming “Inflate-A-Bull” consumable looks like!

Inflate-A-Bull Info:
A suit that gives you cow-like properties, such as being able to roll down hills, bounce off cliffs, and be impervious to fire. You know, normal cow stuff.

Based on the leak, the item will function somewhat like Groot’s Bramble Shield, encompassing players within an inflatable ball shaped like a bull.

Players will be unable to shoot while within the ball, however, they can be shot at by opponents who can then pop the ball. The item will also allow players to bounce around under the influence of low gravity.

When and if the item does get added to the game, it’s going to be amusing to see players bounce about the landscape while being shot at by opponents and Fortnite alien UFOs. Players who own the Guernsey Skin will have a field day once the Inflate-A-Bull is added in-game.

While inside the Inflate-A-Bull, you’ll be unable to shoot as how would you?

This item will also replace your backbling when in your inventory, as you quite literally pull a lever on the backbling to inflate the bull!

Epic Games is at it again conducting surveys for Fortnite. Last time around, the survey only covered movies, cartoons, characters, and artists. However, this time, the list is rather comprehensive and massive.

The topics include sport clubs, movies, clothing, TV shows, streamers, anime, books, artists, athletes, and more. Suffice to say the list just keeps going on. Some of the most prominent names on the list include people like John Cena, Dwayne Johnson, and PewDiePie.

By the looks of it, Epic Games is gearing up for more collaborations in the future. Given that Thanos and Loki skins are the newest add-ons coming to the game, there could be a possibility of a full-fledged Marvel season happening soon. Fingers crossed.

Here is the list of the entire survey sent out by Epic Games:

Fortnite: How to Win the ‘Raise the Cup’ Emote