The 8 best Fortnite wallpapers for PC and mobile 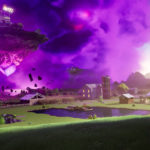 While there are countless games on the market, each gamer will have that one title they just can’t get enough of. When that’s the case, you’ll want to have small tokens around to remember the good times.

Titles like Fortnite have evolved from being just games; they can also be considered a culture. It would be tough for a non-Fortnite player to understand a conversation taking place between two avid fans. There are countless memes, references, and even dances that are core parts of the Fortnite culture.

Changing your phone or PC’s wallpaper to something related to Fortnite will allow you to recall all the memories you’ve accumulated through your gaming career. That one time that you were still able to get a Victory Royale with the worst loot you could have, or when you got sniped by a wild henchman during an intense gunfight will all be a single look away from you. While it’s possible to find fantastic artwork created by the fans to decorate your home screens, the level of detail featured in Epic Games’ loading screens makes them perfect wallpaper candidates.

These loading screens are usually tied to in-game sets or battle passes, and you might have collected a decent chunk of them over the years.

Here are the best Fortnite wallpapers you can use and start representing your favorite game.

Seasons may go by fast as if you’re binge-watching a TV show, but Fortnite always finds a way to keep up. Whether it’s through events or the thematic skins, Fortnite carries the season’s greetings into the map.

Summer Slurp features a bunch of Fortnite characters having the time of their lives at a pool party. With Slurps in hands and not a care in the world, this piece can be an amazing wallpaper, especially during the hotter months. The fact that the pool party takes place at night could be a nice throwback to those times where you and the squad pulled an all-nighter during breaks from school or work.

All Fortnite players leave the Battle Bus with different hopes and dreams. Some imagine getting that Victory Royale, while others head toward the ground to practice their looting patterns for the next Cash Cup. No matter what your goals are or how you’re feeling about the match, the bus driver has always been there and will continue to do so.

The background of the Twilight Flight loading screen is simply breathtaking, but one could also find a deeper meaning buried into the changing shades of yellow and red. Most Fortnite players jump into a match after long days of studies, work, or whatever life throws at their way. The sky on this wallpaper resembles the perfect time to go online and stack up some Victory Royales.

Fortnite has a remarkable art style that’s easy on the eyes. It can still be a decent idea to experience other forms of art, which can also turn out to be superb wallpaper material.

Lost Levels features Skye and her trusty companion Ollie from Chapter Two, season two. Around Skye, there are six familiar faces, including Meowscle and Peely. Despite flying at high speeds, Skye looks like she’s too focused on her video game, similar to how Fortnite players can be during intense boxfights.

Eye of the Storm

The storm has never been a problem for players who always keep an eye on the map. If you lose yourself during looting, however, you can easily find yourself racing against the storm to make it back into the circle just in time.

You may find yourself wondering if it would be better for Epic to release a system to allow players to cut a bargain with the storm. Even sacrificing a loot llama to the storm so it would leave you alone could save countless players from getting knocked out before they make it back into the circle.

Though this is a pretty far-fetched idea that’s unlikely to become a feature in Fortnite, the Eye of the Storm wallpaper resembles how the feature would look like. Considering how rare and valuable loot llamas are, the storm is bound to respect the offering, right?

Just like in life, there will be challenging periods in your Fortnite career. You’ll find yourself on slumps, having doubts about your talents, and wondering whether you still have it in you to get another Victory Royale. It’s hard to give definitive answers to these types of questions. Skills alone won’t be enough to make the cut around the upper tiers of Fortnite’s ranked mode. You’ll need hope and courage next to you, so you can challenge other players without a care in the world.

The color palette used in the Brite Future wallpaper has an uplifting vibe. While there isn’t any context attached to this artwork, it looks to be featuring a believer who thinks they can only go onward and upward. As you head toward the later cycles of the game, you’ll need that positivity with you to overcome all the obstacles your enemies will throw at you.

Hunter and the Hunted

Everyone has that one friend they love dearly who doesn’t play Fortnite. When that’s the case, teaching them how to play Fortnite becomes the core mission of your life. Your process will heavily vary on your mate’s past gaming experiences, and the first couple of games together can create life-long memories.

You’ll need to cover for your friend with your advanced skills, but it may not always be that easy when you can’t find a gun for yourself. With other enemies landing around you, you’ll be against a timer, and your only chances may be through keeping quiet and hiding.

This simple strategy may be simple for you to apply, but your partner in crime will need a thorough explanation of what’s going on. They may still decide to casually use their harvesting tool, though.

Despite having a solo mode, Fortnite is more fun when you’re with friends. Sometimes everyone in your squad will agree on pulling all-nighters to keep the fun going, but all good things must come to an end at some point.

The Last Stop wallpaper features a bunch of characters waving at the battle bus after they were dropped off at the last stop. You can label these players as AFK and move on with your life, but the shining sun in the background injects a more profound meaning into the equation.

Last Stop invokes the feeling you get during tough goodbyes, especially at the end of each Fortnite session with your mates. You know that you’ll be back at it again tomorrow or later, but you would prefer it never to end.

The hectic and fun gameplay isn’t the only thing that kept Fortnite on its feet for this long. The lore and the storytelling have been incremental to keep the player base engaged. There have been multiple storylines that unfolded throughout Fortnite’s history, and Epic has no intentions of taking its step off the gas pedal. Just when you think a storyline is coming to an end, an unbelievable twist happens and keeps the players on the edge of their seats.

The Return is an excellent example of this. It does a profound job of showcasing the unexpected can always happen in Fortnite. The surprised character on the side can resemble a Fortnite player who decides to come back to the game after a couple of seasons. This isn’t something exclusive to Fortnite, however. The unexpected can always happen on all bases of your life, but it’s nothing to be afraid of if you concentrate on making the best out of everything.