SypherPK shows off one of the most expensive Fortnite lockers ever

With the recent rise of the Fortnite.gg website, players’ insane expenditures on Fortnite skins, cosmetics, etc. have come to light. Fortnite.gg is a third-party website that reveals the amount of V-bucks a particular player has spent on their locker.

Many pros have since come to discourage others from using this website since it can access a player’s profile without the supervision of Epic Games.

In any case, this rage revealed some of the richest lockers in Fortnite, which included that of the iconic streamer SypherPK as well. The popular streamer recently revealed his locker, on which he has apparently spent $25,000.

While fans may gasp at the amount, the streamer has previously spent absurd amounts on skins and cosmetics. But it makes sense for him because it is technically Sypher’s job to explore every available element of the game and break it down for the fans.

Since he is a content creator, the money Sypher spent on his Fortnite locker can be considered an investment in a business. 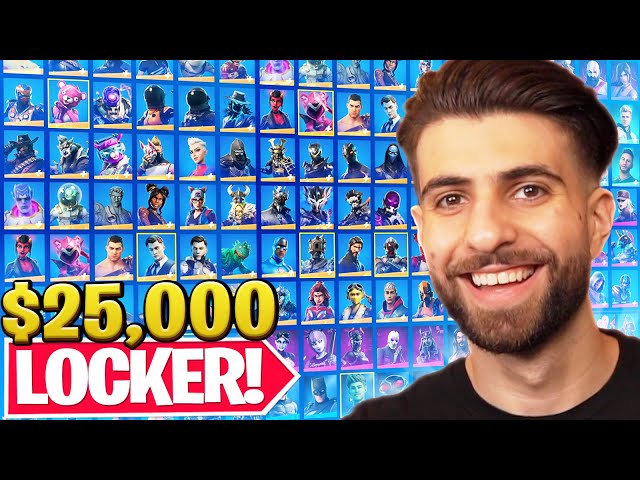 SypherPK kicked off the tour of his locker by going through some of the top skins he has ever owned, starting with the Dark Fallen Rangers skin – part of the Dark series. He went on to showcase the Frozen Love Rangers skin and said,

“I remember when they dropped these Frozen Love Rangers and the Frozen set. It was pretty cool, around the winter time.”

He even displayed the outfit his wife wore during one of their Fortnite streams together, the ARK outfit from the Eternal Struggle skin set. He then talked about the Mandalorian outfit and said that it had one of the worst POIs in the game.

SypherPK later confessed that looking at those made him nostalgic.