Reports Suggest Fortnite Item Shop To Get A Revamp

Season 4 of Fortnite battle royale gave the players a lot of cosmetics to choose from. The last season featured DC heroes and Villians. For those who love to collect and keep a track of skins, Epic Games may yet have a surprise in store. 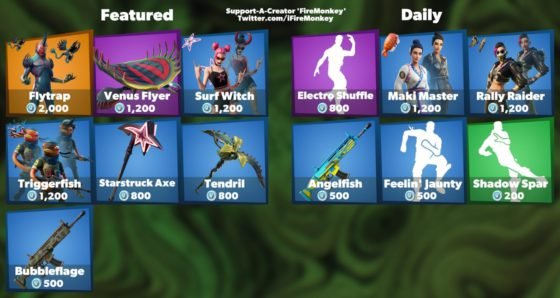 iFireMonkey uploaded a video on YouTube explaining the grand plan Epic has with respect to cosmetics in the game. Players have expressed their discontent with the same items getting recycled every time. The item shop is about to get a major makeover. The community speculated this for a while. Simply because of the custom skins and gear the game files hinted at.

Data miners like Hypex, iFireMonkey have spent hours researching the secret codenames Epic likes to use. This is a prevalent method known to hide important details. For instance, the first time the players heard of Nexus War was from these code-words.

Now, the item shops tab might get another major revamp as suggested by these code-words.

Fortnite item-shop to get a major revamp

According to iFireMonkey, the community speculated that this could’ve been the upcoming “save the world” item shop. However, that is not the case, as that idea was scrapped months ago.

Several players have also explained how they get the same emotes and cosmetics with the randomizer. Thus, it is fairly certain that Epic Games is trying to shift things in a big way.

iFireMonkey also tweeted about the shop tabs that will be helped by this revamp. The “Customize Your Hero”, as well as “Music Packs” would attract any player at first sight.

“Customize Your Hero” tab is a hint that later on in Season 4 players can create their own superhero cosmetic. There is a good chance that this is going to be restricted to the current superhero pool. However, a lot of V-bucks would be needed for that.

Sat on this one for a minute to think about it. In my personal opinion, I feel a fully blown shop rework may be happening behind the scenes. I say this because a shop tab codenamed “Cataba” has been in the work for multiple updates now. pic.twitter.com/POta0dlnWv

Hypex and Lucas 7 Yoshi are also popular data miners. They discussed on the twitter post by iFireMonkey how this feature has not been activated yet. Epic Games will not make a big change without a proper announcement.

The big news stands that when this feature comes out, it will come with a guarantee. Everytime players purchase something, it will always include something new as the reward. Thus, one can rest easy without the worry of getting another recycled cosmetic.

Going over the details about Crafting in Apex Legends Season 6