As part of the Fortnite Spring Breakout event, plenty of Easter-related skins were released into the game.

If you had a bunch of V-Bucks burning a hole in your pocket, then chances are quite good that you picked up some of them. Perhaps you even won the Webster skin if your skills were up to the task.

As it turns out, Webster’s counterpart Megg has a hidden feature that she didn’t tell you about when you purchased her.

Like so many of the skins in Fortnite, Megg is reactive, but Epic didn’t actually tell you that when you bought her. Interestingly enough, the same thing happened with the Diamond Hanz skin, so players are in for a treat when putting on these new skins.

What’s Does She Do?

The “Megg” skin is secretly reactive to damage! from FortNiteBR

In this video posted by Reddit user SmearReddit, you can see the metal mohawk pop out of her head when she begins to take damage.

That’s not where it ends though because this skin can get a completely different look if you find yourself in a lot of battles over the course of a game.

With 100 players in a lobby, there’s a chance you can come out looking completely different than you did when you first hopped off the bus. While the video doesn’t give us the best look at that, HYPEX and Polaq give us a clear glimpse at how damaged this skin can be.

Okay so the Megg skin is a weird situation because @/HYPEX and I can’t tell if she reacts to damage taken or not. She has a texture for damage marks;

She has a tag for a damage tracker but not a reactive tag. It’s not an edit style either, so it’s weird pic.twitter.com/T8mIHLnOyK

The leakers do mention that this skin doesn’t have a tag that indicates she’s reactive, so there was no way to know that was the case when you were buying it.

A lot of skins that are reactive like this will give you the option of turning it off, which is nice if you don’t like what the reactive stuff does to it. In the case of Megg, it seems like this will be always on, so this will definitely influence some decisions on whether to buy it or not.

Considering Spring Breakout is wrapping up later this week, the time to buy this skin has come and gone for a lot of players, so it might be a whole year before people get a chance to pick it up again.

Is This a Big Deal? 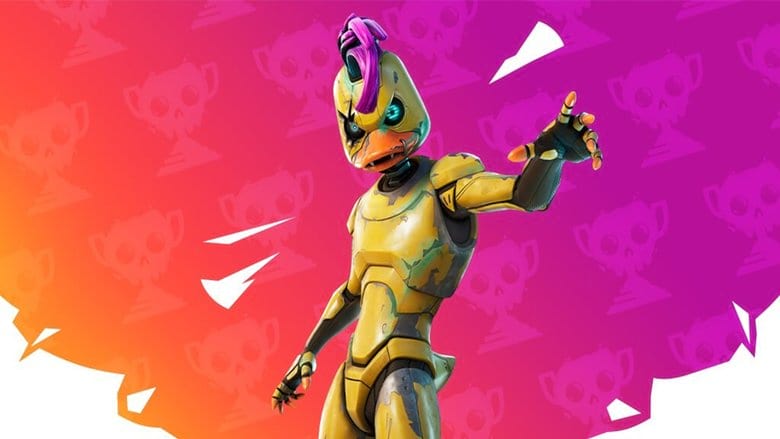 Epic GamesWebster has a friend.

If knowing what you’re buying is important to you, which it should be, then knowing this skin is reactive will be a big deal for you.

Nobody likes having the rug pulled out from under them when they buy a skin that isn’t all as it seems. This situation isn’t exactly the same as Diamond Hanz as the only reactive part of his cosmetic set is the back bling, so you can just take that off if you don’t want it.

In the case of Megg, the whole skin has this feature built into it, so you’re stuck with it if you want to rock this robotic duck skin. For some players, this won’t matter a lot, but we’re sure some people will be disappointed with this news.

How to Unlock the Fortnite Iris Skin | Is it Samsung exclusive?