How to participate, rules, official stream and other details

Epic Games confirmed that the Marvel Super Cup in Fortnite would follow the Venom Cup with an astounding prize pool of $1Million.

Players and fans have been looking forward to the Marvel Knockout Super Series Cups as they offer cash prizes as well as cosmetics. Similar to the Venom Cup, the Marvel Super Cup will also be a duo event.

The Venom Cup will be a good chance for duos to practice before the Marvel Super Cup. The bonus of earning Venom cosmetics is also a solid incentive.

Similar to the Daredevil, Ghost Rider, and Black Widow Cup, the Venom Cup will feature players teaming up.

The Venom Cup will be a duo event, and players will need to have the following criteria figured out. Players need to have a 30+ account level as well as two-step verification enabled. 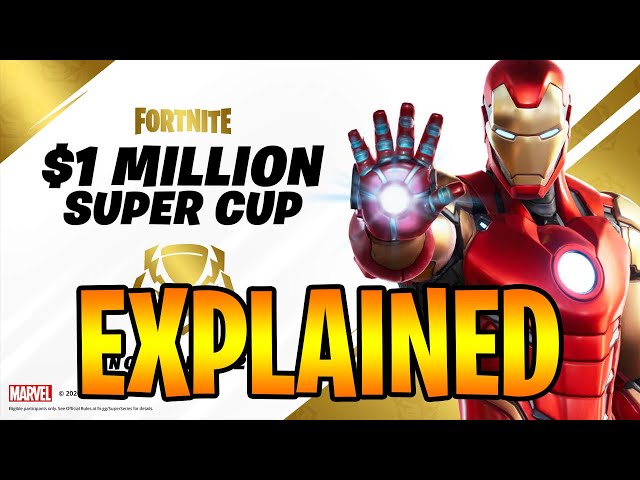 The best players in each of the seven regions will be rewarded with Marvel-themed cosmetics. With all seven regions being eligible, the Venom Cup will be hosted on November 18, but each area will have different timing to avoid confusion.

Needless to say, every team will go at it tooth and nail to win the Venom Cup in Fortnite. Right after the Marvel Knockout Super Series, players will have the Marvel Super Cup lined up with a prize pool of $1Million.

The Marvel Super Cup will be one of the most coveted Fortnite events of 2020. It will stream live on the official Fortnite channel on Twitch on November 21.

Epic Games mentioned in their official blog the criteria players need to be aware of specifically for the Marvel Super Cup.

“On November 21, the heroic journey of the Marvel Super Series will culminate with the ultimate showdown in the $1M Super Cup. If you are eligible (and are up for the challenge), combine any learned skills from the Marvel Knockout Cups with your traditional Battle Royale abilities to battle it out against other Duo heroes for an opportunity to earn a share of $1,000,000 in cash prizes. Besides the addition of powers, the materials granted on elimination are reduced to 20 and a material cap set at 200 per material, so use your builds wisely!”

Players will also have to follow a new set of rules different from the other Marvel Knockout Super Series Cups. The Marvel Super Cup in Fortnite will also feature a different scoring system.

The first prize for the regions are as follows:

The prize money awarded to players coming first in Marvel Super Cup – Asia, Middle East, and OCE will be $2500.

Players have to make sure that they are ready for the most bountiful Cup in Fortnite Chapter 2 – Season 4. Epic Games is indeed pulling out all the stops when it comes to rewarding their Fortnite community.

Tfue stands up for SypherPK on skill-based matchmaking complaints