As part of the Cosmic Summer Event in Fortnite Season 7, Epic commenced its annual summer event in the game. The event features numerous quests that players need to complete in order to acquire great rewards.

Starting today, the remaining four Cosmic Summer Quests were made available to players.

This is only the fourth week of Fortnite Season 7 and Epic has already shown off a ton of quests, skins, and events in the game.

Epic is now offering Marshmallets which is an Epic Harvesting Tool from the Undercover Summer set for free.

The last set of Cosmic Summer challenges will be live tomorrow! This one will require you to play The Pit Creative LTM. pic.twitter.com/65llTE4LlO

Fortnite Season 7: How to get the Marshmallets pickaxes for free

Regarding the Cosmic Summer Event, Epic has added LTMs to Fortnite Season 7. To get the Marshmallets pickaxe for free, players need to participate in an LTM called “The Pit “http://www.sportskeeda.com/” and complete some challenges.

To join this LTM, they need to go into Fortnite Creative and enter the following code when prompted:

This is the map code for entering “The Pit” map. Now, the fun stuff starts.

Once players get the desired amount of kills, they will be rewarded with Marshmallets pickaxes along with 30000 season XP, and a loading screen for free. 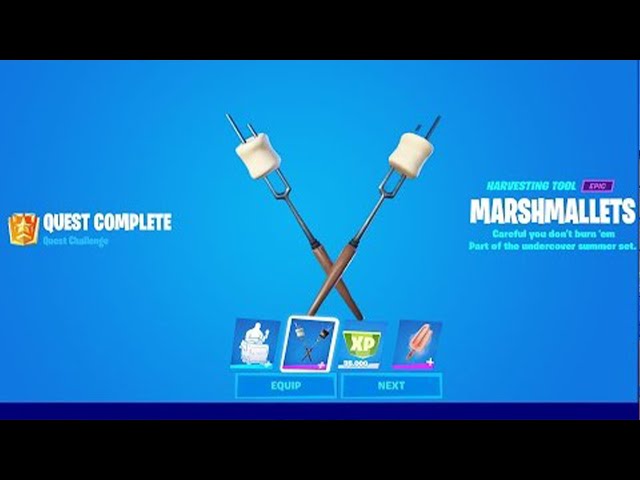 These Marshmallets pickaxes are forever kept by the players.

Epic today also launched the Week 4 challenges for players to complete. These challenges accentuate the Fortnite Season 7 theme of aliens and extraterrestrial invasion. Embellishing their games with innovative ideas and sublime additions is quite emblematic of Fortnite creators.

This month also saw the arrival of the Asgardian God of Mischief Loki into Fortnite Island. The season is nowhere near its end and Epic is in no mood to stop, so players can expect new things and events to make their way into Fortnite Season 7.