How to Get the Fortnite Stonks Diamond Hanz Skin 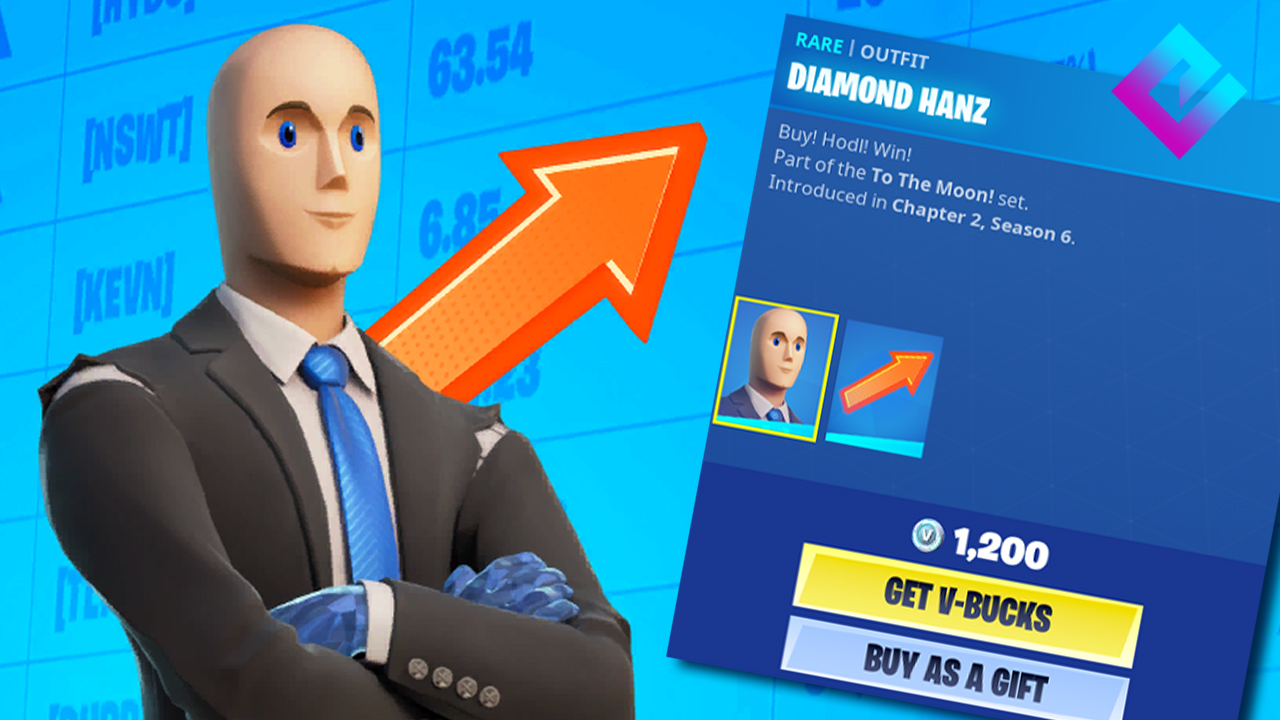 Epic Games is always great about celebrating holidays and other occasions with new skins to check out in Fortnite battle royale, or at the very least, older skins coming back. But the new Fortnite Stonks skin might be one of the weirdest additions to the game in the history of battle royale.

The new Fortnite Stonks skin, officially known as Diamond Hanz, is an especially meme-worthy cosmetic item that shows that Epic Games has a bit of a comedic side to it. As you’ve probably seen many times before, the classic stonks meme is shared quite frequently online.

This viral meme is ridiculous-looking wearing a suit and appears in front of some market numbers for the stock market. The meme represents some rather foolish decisions that someone might make, regardless of whether or not it is involved with stocks.

The stonks nomenclature stuck as another way of representing how foolish the stock decision someone is making might be. It has become a meme for various validations like this, especially if you were a fan of the Animal Crossing craze that happened in 2020.

The turnips market in that game was a heavy fuel to the stonks fire, and the meme was molded to shape that game’s community quite a lot. It only helped this stonks meme to become even bigger. Now, Epic Games is getting in on the action with the official Fortnite Stonks meme skin.

Known officially as Diamond Hanz in the game, this skin is one that you can now get in Season 6 of Fortnite battle royale. It is the latest high-profile skin in the game and is certainly hilarious to see in-game, but it isn’t the joke you might think it is.

With the arrival of April Fool’s Day recently on April 1, it would make sense for a massive joke like this that isn’t true. However, it is true, and you can get the Fortnite Stonks Diamond Hanz skin for yourself in the game right now, or at least at the time of writing this.

That is because it is likely that this Fortnite Stonks skin is going to be a limited-time offer in the battle royale title, much like the other viral and crossover skins that appear. As such, you must do your best to nab it for your collection as soon as possible if you are interested in it.

As for how you get this skin, there is only one way to do it at this time, and it is no surprise to seasoned Fortnite players. You will want to look to the daily item shop as the place where you will be able to pick up this special skin before it leaves for good.

However, there is something that you should keep in mind about this particular skin, and that is the fact that Epic Games is selling it uniquely. Well, sort of. Normally when we have a crossover or inspired skin like this one, it is sold in a couple of different ways, like having it separate in the shop for cheaper or a bundle with other items.

This gives the player the freedom to select how they would like to purchase the skin. If you want all of the items anyways and would like to save some V-Bucks in the process, then the bundles are always a great option for getting the skin and other items.

But if you are looking for the skin and none of the other fluff, you can save some money by just picking it up independently. However, with the Fortnite Stonks Diamond Hanz skin, you can only get this one through one of these ways, which is by purchasing the actual bundle.

You are not able to get the skin on its own at this time in the item shop but will have to settle for the whole bundle if you would like to purchase it. Fortunately, the bundle is quite affordable compared to the standard sets in the item shop for special occasions.

It only costs around 1200 V-Bucks, which is fairly priced considering that many skins in the game on their own — not in bundles — cost around 1500 and higher at times. This is likely due to the skin being based on a meme and not a person or fictional character.

Also, the bundle is pretty light in itself, with only the skin of Diamond Hanz and a back bling included with it. The back bling is of a red arrow pointing upward, making good use of the meme that is ironically showing the arrow pointing up as in a gain but is red that is usually the color for a decrease.

So, if you want to pick up the Fortnite Stonks skin for yourself, you’ll have to shell out 1200 V-Bucks, or around $12, to pick up this bundle and get the skin and the back bling with it. That is a fairly cheap bundle, and one benefited by the fact that you can get V-Bucks at a discount these days.

Keep in mind that the Diamond Hanz skin is likely here to celebrate April Fool’s Day, so there is no guarantee that it will stay in the item shop for too much longer. Be sure to pick it up while you still can if you want to purchase it.

How to eliminate 50 IO guards for Fortnite’s weekly challenges