How is the Crystal Axe Of The Masters reactive in-game?

Fortnite Chapter 2 Season 6 is continuing to surprise players with new weapons, new NPCs, and new skins. Currently, the community is occupied with the reactive features of a new pickaxe.

Fortnite YouTuber Tabor Hill released a video earlier today exploring what the community might see when using the pickaxe.

The Fortnite Crystal Axe of the Masters Reactive Pickaxe

With the Fortnite Raz skin gaining a lot of attention from the community, the release of the Crystal Axe of the Masters has loopers scanning every inch of the pickaxe for even more clues regarding the expected return of the Cube. 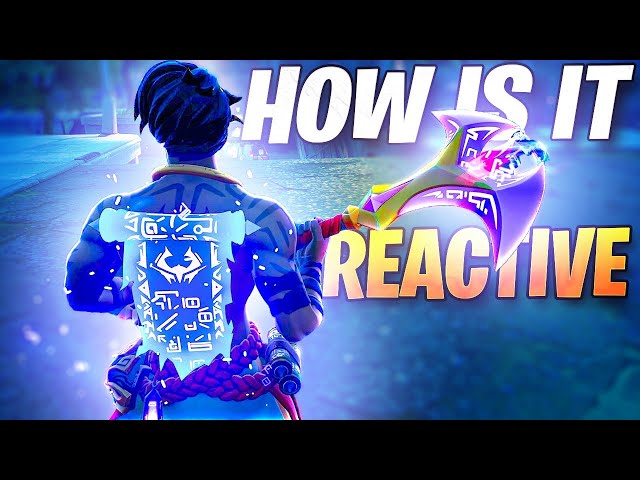 This pickaxe is part of the Spire’s Call Set and is linked to the famous Raz skin. Noted as being carved from a Zero Point stone, the Crystal Axe of the Masters clearly adds to the mystical storyline of both Raz and the Spires.

As Fortnite Season 6 slowly reveals raptors, new weapons, and more hidden features, fans everywhere are discussing what the reactive nature of the Crystal Axe of the Masters could mean for the current Season.

Tabor Hill’s video follows the YouTuber as he uses Raz to swing the axe both aimlessly and aimed at a wall. The in-game lighting goes from light to dark, revealing a better-seen glowing flame on the pickaxe. However, Tabor Hill noted that there was nothing reactive to observe about the axe, other than the trail left behind when swinging the axe.

Having had multiple requests for him to review the reactive swing of this pickaxe, Tabor Hill continued to look closely at the item and find its reaction.

It was not until Tabor Hill watched his Raz skin swing the Crystal Axe of the Masters that he noticed the head of the axe and a portion of its handle, does in fact glow. Upon swinging the axe, it becomes illuminated with a bright purple light.

Though it is a subtle reaction barely visible with the sun shining on players’ skins, the Crystal Axe of the Masters does react while being used.

The quick flashes of light seen in the trail fall from the axe as it lights up, adding yet another mystical aspect to the Zero Point battlefield, which could perhaps play a part in the reveal of the Cube’s power.

Waffles unbanned from Fortnite under threat of legal action