Bugha is one of the most famous names associated with Fortnite. He is a seventeen-year-old American gamer/streamer, who plays professionally for the Sentinels, and was the winner of the inaugural Fortnite World Cup back in July 2019.

We have talked about this season’s Fortnite Champion Series which is currently underway. Week-1 is in progress, with a host of top tier trios participating. This includes Clix, who is playing with Bizzle and illest, along with other top players such as Benjyfishy, Scoped, Mongraal and Highsky. However, the tournament hasn’t started out on the best note for Bugha.

Earlier, we had talked about TSM demonada, who had launched a scathing attack on Bugha’s father on Twitter. He had accused Bugha’s father – Glenn Giersdorf, of using his son’s success for his own benefits, and called him a leach.

Now however, Bugha’s own teammate appeared to call him out for spending ‘too much time’ with his girlfriend. This is the second person close to Bugha who has been talked about by a fellow content creator in a matter of weeks.

As you can see above, Avery posted on Twitter talking about the 10th position that they got in the recently concluded ‘Ninja Battles’. This was followed by a jibe aimed at Bugha for apparently not practicing enough, and instead spending time with his girlfriend.

The tweet was picked up by fans immediately, and resulted in a Reddit discussion on the r/FortniteCompetitive subreddit. User Embarrassed_Ad394 attempted to explain the situation, and said that Bugha’s girlfriend is visiting from Florida. According to EarlyGame, Bugha is in a relationship with fellow Twitch streamer Angelica. The streamer had, until August 6th 2020, posted photos with Bugha, and has since deleted her Twitter account.

Regardless of his personal situation, Bugha’s teammates do not appear to be too pleased with his lack of commitment towards Fortnite, of late.

To make matters worse, Jake Lucky also got in the act, and posted the following on Twitter.

Couple weeks ago Bugha was called out by a Fortnite Pro who said his dad was cringe and a leech, and now Bugha is being called out for spending time with his girlfriend

In response, fellow Fortnite professional BBG Calc corrected Jake Lucky and said that it is Bugha’s own teammates who are calling him out for spending too much time with his girlfriend. While the discussion was in good spirits, Avery’s tweet on the matter has since been deleted.

You can watch The Fortnite Guy’s video explaining the situation below. 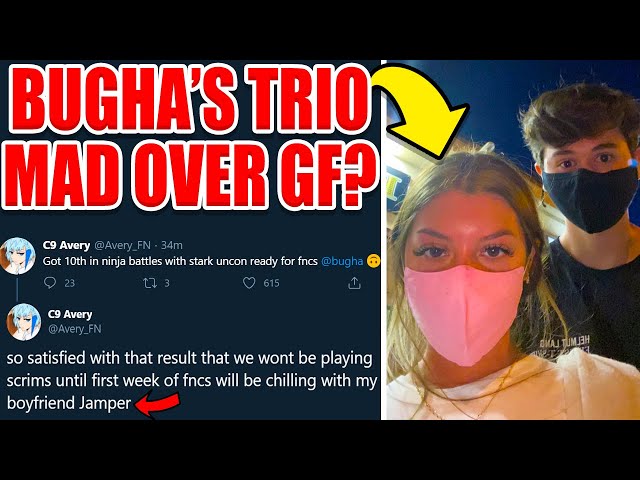 How free e-sports has become a billion dollar industry