Fortnite players should be well acquainted with the way Epic Games does updates by now. Around 4 AM ET, the servers go offline for the necessary changes. Things typically go as planned, and the game is back up in a matter of hours. Players can then spend the rest of the day doing the one thing that matters: getting those Victory Royales. There’s a little humor in that. This time is all the same, and you can now jump into the v15.40 update of Fortnite, which brings the latest wave of changes to the game.

There are a few headlining changes that the Fortnite Status Twitter account mentioned. Fans should be generally receptive to what’s new, or rather, what’s back. Remember the Flint-Knock Pistol from Chapter 1 Season 6? It’s back, and it will offer some potentially interesting options during gameplay.

The Flint-Knock Pistol is not only a powerful weapon to knock enemies around with; you too can send yourself flying with it. Jumping into the air and firing it will send you soaring from the kickback. Expect a little less explosive power than an Impulse Grenade, though. It will certainly be handy for evacuating bad situations, going for trick shots, gaining height in build battles, and escaping the Storm. You’ll need heavy ammo to use this literal hand cannon. Now, go get creative with it.

Other ways to fly and get high

You can also get excited about the return of the Air Royale and Floor is Lava LTMs. These are always good fun for people that get sick of the turbo build battles at the end of normal matches. Air Royale lets you fight it out in planes along with teammates. The Floor is Lava will require you to find some high ground or create your own to escape the rising magma around the map.

Aside from those returning LTMs, there will be more exotic weapon options around the map in the normal battle royale modes. Epic didn’t specifically say if new exotics are coming, but you will be able to acquire them from more characters now. Exotic weapons are expensive, however. If you need to learn how to earn more gold bars, just hit up our guide on the topic.

Fortnite update v15.40 also brings an adjustment to the level of detail in PC Performance Mode. This is sure to be geared towards higher frames on lower-end systems. Just keep in mind this mode is still in alpha testing, so there are more changes still coming. 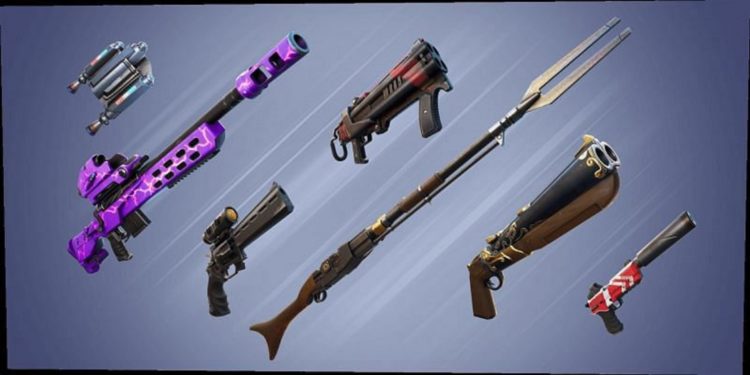 These are just a few of the exotic weapons you can find around the island. Expect more chances to acquire them now.

The Fortnite Status account also mentions that unreleased content will be removed from Creative islands in a future update. This has fans pretty upset, naturally. The more they have to work with only fuels more creativity, so they were likely hoping for the opposite. Fans had to glitch in some of the content to implement it, and those maps will suffer from the inevitable update. Epic didn’t explain its reasoning for this decision.