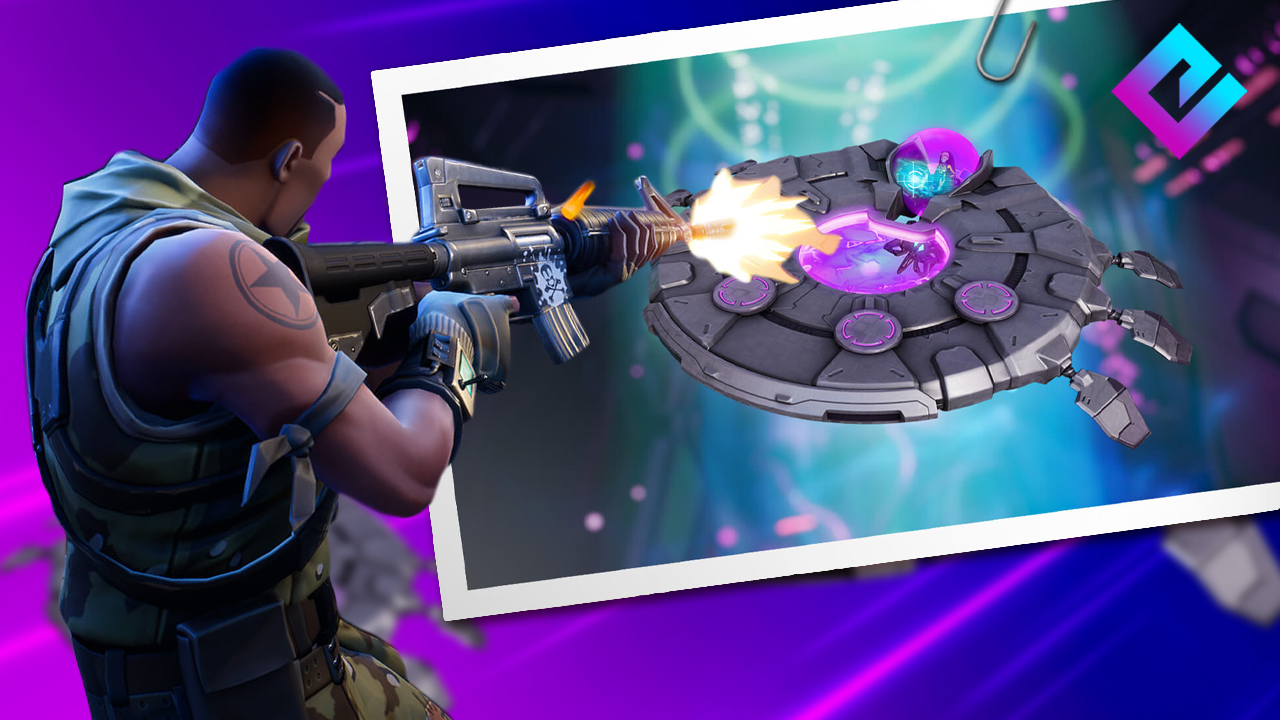 Reddit is great for players to come up with excellent Fortnite battle royale ideas, and yet another user has proposed something worth checking out. This time around, a user has come up with a Fortnite UFO saucer counter idea that could go a long way towards balancing the meta.

Season 7 is all about the Invasion of the alien menace with the mothership looming over the island and the flying saucer vehicles that you can find on the map. Unfortunately, these flying saucers are similar to past vehicles that dominated the season by being a huge part of the metagame.

This has led to many players complaining about the flying saucers, as they are what many players will use in the endgame of a match to try and get the victory royale easily. To help with this major issue in Season 7, a Reddit user on the Fortnite subreddit page has come up with a possible solution.

The Reddit user DrewK26 posted about this, noting that they came up with this Fortnite UFO saucer counter idea after the recent complaints from Fortnite players in the community. They came up with a concept for an item that would be the counter to the vehicle in matches moving forward.

They call the Fortnite UFO saucer counter item the “anti-air rocket,” which it sounds like. This item is a single rocket weapon of sorts that a player can fire off to easily take down a UFO vehicle and balance out this potentially troublesome element of Season 7.

Not only did they come up with the Fortnite UFO saucer counter idea, but they went into deep details about what exactly it would do in combat. For starters, it is a throwable and consumable item similar to the bottle rocket item in Fortnite’s past.

When you pick up this item and use it, what it will do is act like a homing rocket that will hone in on an airborne player gliding around or a vehicle in the air, like the UFO. It will deal some decent damage to the enemy player, while the anti-air rocket will deal “devastating damage” to any vehicle.

The actual stats break down like this: the players that get hit by this rocket will take 75 damage in this concept, but vehicles will take a whopping 550 damage, and structures that are hit will take 200 damage. That 550 is basically enough to take out most UFOs, especially if they are already damaged slightly.

This Fortnite UFO saucer counter idea gets even more specific than that, noting that it would only target the players and/or airborne vehicles and at least 10 meters above the person launching it. In addition, it will only target something within five tiles horizontally and 20 tiles vertically, so you would want to be decently close.

If there is no target at all when it is fired, then it will simply go straight up in the air and explode like a firework. However, if it does have a target that it is honing on and something else, like another vehicle or player, gets in the way, it will explode prematurely and deal the correct damage to that object.

It will have a small damage radius at a fourth of a tile to catch some of what is around the object. The launch of the rocket and the subsequent explosion would, oddly enough, be pretty quiet in this concept with a moderately loud sound, but one that is slightly quieter than the bolt-action sniper rifle.

Overall, the Fortnite UFO saucer counter rocket idea is a pretty solid one that we hope Epic Games’ developers take note of. This is especially since the community on the subreddit page has nicely taken to the idea, giving it 96% since its posting and a good number of supportive comments.

One commenter noted an anti-air battery that leaked in the past that was likely to be a counter for the Choppas that was never released. This shows that Epic Games has considered an anti-vehicle weapon like this at one time, making it seem possible that a rocket-like this could be released in the future.

However, some questioned whether or not this idea is even necessary to happen. They noted that there are the mounted turrets that you can use at the dish bases around the island capable of dealing some solid damage to the flying saucer vehicles.

However, the problem with those is that they are stuck to the dish bases and are potentially vulnerable to players on the ground who can easily find them shooting away. There is also the rail gun, which is a powerful gun that can take down the UFOs in a few shots, but it is not always perfect, and then there is the nature of the vehicle.

Even if you do take it down, it has multiple “lives” to it that can repair itself and then be back up again. Sure, I’ve seen a player be capable of taking down a flying saucer multiple times, but it is rare and something that makes them vulnerable to being taken out, too.

For now, though, I think that the flying saucers, while a problematic and dominant force in the current season, are not nearly as egregious as some of the past vehicles in Fortnite.