Fortnite fans are making noise on social media again and this time they want Snipers gone.

The Sniper Rifle is a staple weapon class of the shooter genre, be it based upon a real-world product or a totally original concept. While each title offers its own unique take on the Sniper, the principles of rewarding slower, more tactical playstyles and pinpoint accuracy remain consistent.

We’ve seen many examples in Fortnite over the years, from the original Bolt-Action to the Hunting Rifle, the infamous Heavy Sniper to the Storm Scout, and in Chapter 2 Season 5, even a selection of outlandish Exotic variants.

During the last couple of days, the hashtag #RemoveSnipersFromComp has gained traction on Twitter, with a bunch of pros making their opinions known. It’s important to note that people are only asking for Snipers to be removed from competitive playlists, and not vaulted all together.

There’s nothing quite like channeling your inner marksman and hearing that little ‘dink’ as you headshot someone from 200 meters away, so what’s the problem?

Though Snipers can be great fun to use, being on the receiving end is a nightmare. Being taken out in one shot by an enemy you didn’t know existed can completely ruin a tournament run, potentially costing thousands of dollars in prize money.

Sure, you can zig zag or jump to make yourself a harder target, but unless you have builds blocking off every possible angle, you’re never fully safe. This further adds to the ‘RNG’ or luck factor that is already an inherent issue in Battle Royale games, especially in Solos.

Last season’s Primal update was the first time in Fortnite history that no Sniper Rifles were available in core game modes. They were replaced with Bows however, which also had the ability to eliminate a max-health player in one go and turned out to be just as deadly.

The biggest change isn’t just the damage the velocity is SO MUCH faster.

With that in mind, it seems unlikely that Epic Games will ever remove Snipers (or similar weapons) altogether, so let’s look at some changes that could make them work better in competitive:

Fortnite’s Snipers have been nerfed multiple times in the past, and right now, base damage isn’t really a concern. Even the Legendary Heavy Sniper deals less than 150 damage to the body, meaning anyone who has full health and a couple of Mini Shields can tank a shot.

It’s the headshot multiplier where things get messy. The majority of Snipers can kill an opponent with a single bullet, regardless of how healthy they are. Simply reducing headshot damage into the 190 region as with the Storm Scout would make a big difference.

When Epic added the Bandage Bazooka in Chapter 2 Season 1, they introduced a novel way of balancing what was undoubtedly a very powerful item. By having it take up two inventory slots, they forced players to sacrifice another piece of loot in order to carry it.

Unfortunately, excluding the Chug Cannon, which just shoots Chug Splashes rather than Bandages, they have not used this concept on anything else. Making Snipers require two inventory slots would be very interesting, as it would mean that you only have space for one heal, assuming that you are holding both a Shotgun and Assault Rifle.

Currently, Heavy Ammo is so abundant that you will often find players haphazardly spamming snipes over and over until they inevitably connect. Minimizing the amount of ammo available would help combat this and make every shot count.

They could either do this by putting a cap on the number of bullets that a player can hold like they did with Rockets, or by making Sniper Rifles a limited use item similar to the Harpoon Gun.

OG Fortnite lovers will remember that to begin with, the Bolt Action had significant bullet drop, meaning you had to factor in how far away an enemy was and their movement when lining up a snipe. While this is technically still the case, the adjustments needed now are almost negligible, and your shot will end up pretty close to wherever you place the crosshair.

It may seem a little weird if Epic changed it back after all this time, but they could bring out a brand-new weapon with old school bullet drop. Not only would this decrease the number of annoying deaths when rotating, it would also make hitting a good shot feel so much more rewarding. 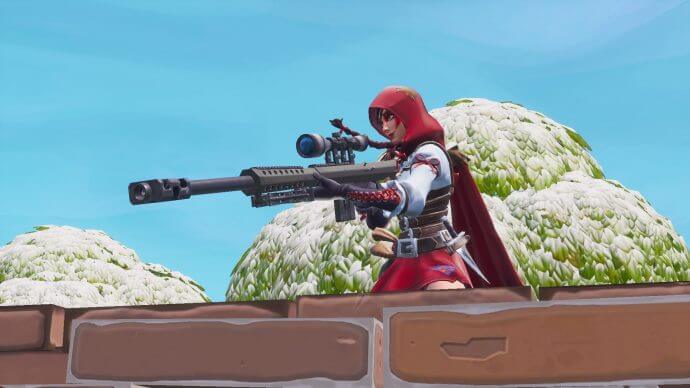 Like it or not, Sniper Rifles of some description will probably always have a place in Fortnite. Having said that, they are definitely not optimized for competitive play in their current state.

The easiest way to start addressing this is to lower headshot damage, though implementing any combination of the suggestions above could be useful. Hopefully the developers can open up a dialogue with representatives of the professional scene and find a suitable solution soon.

How to find the Fortnite Cube memorial locations