“May the 4th” is almost here, and according to recent leaks, Star Wars outfits and cosmetics are coming back in Fortnite Season 6.

Epic Games released a lot of features in the new season with the v16.30 update in Fortnite. The publisher worked on the gameplay and improved it as per the primal-themed season. The update also brought forth some mandatory changes, along with Star Wars cosmetics in game files.

Since we are approaching May the 4th, we could be seeing some Star Wars related items enter the game.

I’m doubtful we’ll see Star Wars cosmetics, since the only one with current item shop assets is the Imperial Stormtrooper. #Fortnite pic.twitter.com/KOo8fe0Vpi

Season 6 saw Neymar being introduced as an NPC, and following his inclusion, Epic plans to bring in Batman in the game. Fans are now left to wonder whether the same will be done with Star Wars characters, especially on May 4th, 2021.

Fortnite has collaborated with a lot of popular cultural icons over the past few years. Epic has popularized the game by including trending cultural giants such as Marvel, Travis Scott, NFL, and Star Wars, to name a few.

These collaborations not only brought a massive wave of popularity but also provided gamers with new exciting skins and other objects in Fortnite.

Recently, data miners have revealed that loopers might get hold of new Star Wars skins tonight. Although nothing has been confirmed, fans hope to see Kylo Ren, The Mandalorian, and Baby Yoda in the item shop tonight.

Ohhh I just remembered we MIGHT get new Star Wars skins tonight!!

The first live event of Chapter 2 was, in fact, a collaboration with Star Wars: The Rise of Skywalker. The event coincided with Fortnite’s Winterfest event and ran from December 14th, 2019, to January 7th, 2020.

Cosmetics from the Rise of Skywalker event included characters like Finn, Rey, and Sith Trooper. The Tie Whisper glider was also given to all players following the success of the collaboration event. 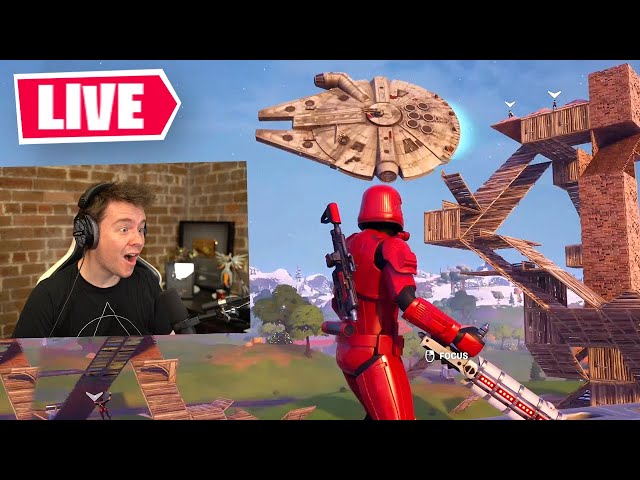 The Fortnite x Star Wars collaboration saw lightsabers become a significant part of the game, as it was introduced for the first time. Players could obtain Kylo Ren’s, Rey’s, Luke Skywalker, and Mace Windu’s lightsaber from special chests in the battle royale mode.

Season 6 has seen Fortnite collaborate with Horizon, Neymar Jr., Rebirth Raven from the Teen Titans, and Tomb Raider. Hence, players can expect that some new unreleased Star Wars outfits might be showcased after the Item Shop update on May 4th.

Previously, it was leaked that The Mandalorian would return to the item shop, but fans will have to wait to find out who else is coming with him in Fortnite Season 6.