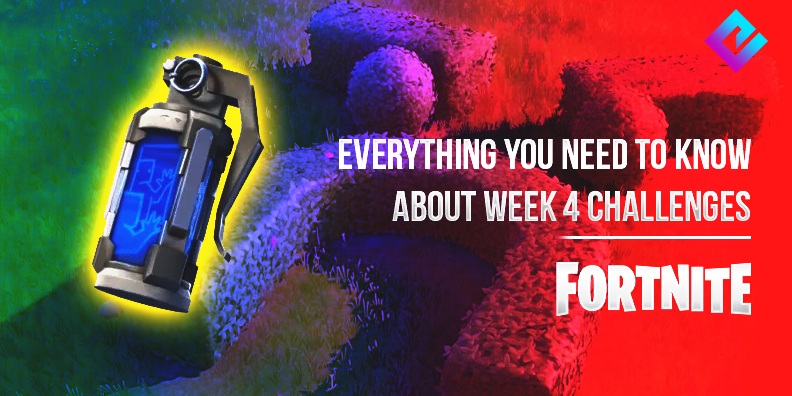 Fortnite is expanding in Season 2 of Chapter 2 as we now have the Week 4 challenges, courtesy of Epic Games. The latest weekly challenges are here as expected, but they come with a variety and rewards that are welcome nonetheless as the season pushes along nicely.

The Fortnite Week 4 challenges have a total of 10 this week that players can do. This is standard and equal to around every other week in recent memory. What is interesting about these challenges, though, is that they are the second batch of TNTina’s Trials.

Following the formula set by the first two weeks of this latest battle royale season, the weekly challenges have a theme. Not only are they themed, but the theme of each week centers around the five miniboss characters and skins that you can collect in the game currently.

For the first two weeks, it was all about Brutus and the briefings that he had for players. Last week started TNTina’s Trials. It continues and concludes with week with the Week 4 challenges. This is because they are the second week of trials from the explosive maniac.

Players can find the second and final batch of TNTina’s Trials, otherwise known as the Week 4 challenges in Fortnite battle royale, below:

As you can see, the challenges this week are great and make up for the not so great ones offered last week. Many challenges have to do with fan-favorite new mechanics introduced in Season 2, as well as explosives in general.

Without further ado, let’s take our deep dive into the Week 4 challenges guide, starting with a look at the Fortnite Grumpy Greens visiting challenge.

Where to Visit Fortnite Grumpy Greens, Mowdown, and Risky Reels

The first challenge that we must go over this week is also one of the biggest and more difficult challenges to accomplish. You must visit the Fortnite Grumpy Greens, Mowdown, and Risky Reels locations. This would be easier if they were named locations, but they aren’t.

Instead, all three of these spots that you must visit are landmarks on the Season 2 battle royale map. Landmarks differ from the other points of interest in that they don’t have a name on the main map for the island. As such, it can be harder to find them if you don’t know where to look.

While you likely have no problem finding Risky Reels given how popular and important it has been in recent months in the game, the other two are obscure. It all starts with the first location that we need to visit in this Week 4 challenge: Fortnite Grumpy Greens.

You won’t find this strange landmark location on the map even without a name, unlike Risky Reels. It is a very small area located just east of Pleasant Park. East of there, you will find a hill where this landmark location is found.

What you are looking for is a group of grassy hedges that are put together into a weird shape. It is hard to see it from the ground while you are next to it. The hedges are shaped in the form of a sad or angry face, hence, the name.

Unlike the landing challenge in previous weeks, you don’t have to worry about landing there. All you need to do is visit it. As such, it is certainly possible and easy to visit all three landmark locations in the same match. They are all relatively close to one another, which is even easier.

Your best bet is to do the Team Rumble game mode like we usually recommend. It allows for more time before the circle closes, respawns if you do die, and fewer enemies to worry about overall. Plus, this season made the redeployment feature a permanent addition.

After Fortnite Grumpy Greens, you will need to head to Risky Reels or Mowdown next. Risky Reels is the closest found directly west of Frenzy Farm. It is in between that large named location and the huge river that flows west of the farm.

Risky Reels is likely a place you already know about and have visited in the past as it is a big outdoor movie theater. It was also the star of the impressive Fortnite Star Wars event that happened last year during the exceptionally long Season 1.

The final location that you need to visit is Mowdown. It is a little bit further away from Risky Reels, found north of Frenzy Farm. On the northern outskirts of the farm, you will find the Orchard landmark that you visited in the past.

But if you go a little bit past it, you will find a hill that you can climb. This will take you to the Mowdown outdoor party area. It is a rather small location like Fortnite Grumpy Greens, so it is easy to miss. Once you have found all three, you will complete this first challenge.

How to Destroy Structures With Mines and Fish With Explosives

Next up is to search for treasure chests at Pleasant Park or Slurpy Swamp. There are 10 that we need to find in total, which you can do across multiple matches, if necessary. Since you are already heading near Pleasant Park anyways for the previous challenge, it is possible to do both at the same time.

We recommend heading to the houses in Pleasant Park and the park in the field of the named location as they are home to a good number of chests scattered around. Slurpy Swamp has a decent number of chests, too, but it can be a bit confusing to navigate around the factory and find them.

For the third challenge, you need to destroy 20 opponent structures with either proximity mines or remote explosives. The former is a relatively new weapon added in an update recently. It allows you to place mines and wait for players to walk too close for it to blow up.

The remote explosives, on the other hand, let you place it and then blow it up manually when you want to. The former is a solid explosive, but it can be hard to use for this challenge. We recommend the remote explosives since you can control when they blow up more easily.

Twenty structures are a lot, so feel free to take your time with this challenge across multiple matches. The next one is to fish using explosives three times. You can head to any of the major water sources on the map and look for the foaming white circles indicating fish are nearby.

Then what you want to do is grab yourself an explosive like a grenade or RPG and start lobbing them into the foaming circles you found. That will blow it all up and potentially nab you some fish in the process. Do this three times in total and you will be good to go on this challenge.

How to Use Decoy Grenades and More

Next up is to eliminate five players at either The Agency or Sweaty Sands named locations. Both are relatively popular destinations for finding other players, but our recommendation is The Agency. It is possibly the hottest location in Fortnite currently, so there is no shortage of enemies.

Like we say every week with a challenge like this one, it is best to head to the location at the start of the match. This will allow you to get gear before the others and, hopefully, take them out before they get shields and the like. This makes for easier eliminations.

Five is a lot, though, so be sure to take your time, if necessary, and just aim for one elimination per match that you do at these locations. The following challenge has players search through ammo boxes in seven different named locations around the Season 2 island.

With the start of this season, five new named locations came to the game, giving you a plethora of options. As such, there is no shortage of named areas that you can head to for this challenge. However, we do recommend the more suburban locations like Pleasant Park, Salty Springs, and the like.

These areas have houses and homes typically with one ammo box. Since you must visit seven different locations, this is not a challenge expected for one match. Just make sure to find an ammo box each time you visit a new location on the map.

Now we need to use five decoy grenades. The relatively new item in the battle royale game allows you to create a clone of yourself that will fight alongside you and help you out for a bit. You need to use five of them, but they don’t have to be in the same match.

The best place for finding the decoy grenades is in chests, so this is another challenge that you can do alongside one of the others.

How to Scan Henchmen and Collect Boss Weapons

For the eighth challenge this week, we need to deal 200 damage to opponents while in a motorboat. This is a familiar challenge that we feel like just happened in the game. First and foremost, you need to find a boat before you can start dealing damage.

Boats are found typically near named locations that are by the water and other areas. We recommend heading to places like The Agency, Sweaty Sand, Dirty Docks, Misty Meadow, and Lazy Lake. Grab yourself a boat and then the real fun begins.

You can deal damage a couple of different ways. You can do so by riding in the boat and using your weapons or piloting it and using the already available missiles to blow up opponents. 200 damage isn’t a lot, equal to two players with 100 health each or one player with full health and shields.

The second to last challenge requires you to scan a henchman in three different matches. This will take three matches but is relatively simple to do. Henchmen are new NPC enemies that you can find at the five new named locations in Season 2: The Agency, The Shark, The Grotto, The Yacht, and The Rig.

Head to any of these locations, gear up, and fight a henchman roaming around. They will be knocked down but don’t kill them yet. Head over and interact with them to shake them down. This will let you scan for the other henchmen in the area. Do this in three separate matches and you’ll complete this mission.

The final task this week plays into the previous one and requires you to collect three different boss weapons. Just like there are henchmen in the game now, there are minibosses that you can fight as well. You can even use the henchmen scan to locate them.

You will then need to take them out, at which point they will drop their boss weapon. Pick it up for it to count in this challenge. The catch is that you need to do this three times and with different bosses. The five new Season 2 named locations each have a different boss, so just head to three of those spots.

The reward that you get for these challenges is 40,000 experience points for each of them. But if you complete most of TNTina’s Trials this week and last week, you will unlock a special mission that you can do. It will allow you to unlock a special skin variant of your choice for TNTina once you unlock her skin in the Season 2 paid battle pass.

Tfue explains why he thinks Fortnite will die in Season 11