Which trios claimed a piece of $5 million and the Axe of Champions?

Competitive Fortnite’s flagship Fortnite Champion Series (FNCS) event came to a close earlier this evening. Trios across the world competed on both PC and console for a piece of the $5 million prize pool at stake. The championship weekend began with heats, where teams either punched their tickets into the Grand Finals or became part of an evolutionary match in Fortnite history. Teams unable to qualify through heats had one last chance, in the form of the highly anticipated Wildcard Match – where the lone winner in one do-or-die game secured a spot in the finals. Grand Finalists battled across 12 matches to determine the Chapter 2 – Season 4 Champions in all seven competitive regions.

When all was said and done, Fortnite crowned seven FNCS Champions. All of whom received a share of $5 million and the elusive Axe of Champions. Europe and NA East led the way with exceptional endings, but every region brought something to the table. Let’s take a look at which trios etched themselves in history and became one of only five Fortnite Champion Series winners.

Mongraal and Mitr0 won their first Fortnite Champion Series after a long six-season wait, earning real redemption from their letdown back in Season X. The long-time duo came through this time with Chapter 2 – Season 3 FNCS Champion, TaySon. This lethal combination of players dominated on day one, achieving two Victory Royales and a whopping 42 eliminations en route to 131 points. The three players had a healthy 30-point lead heading into the final seven matches.

Th0masHD, Flikk and Anas surged in the final six matches after switching their drop spot to Stark Industries. They improved from 15th place to 3rd to close out the competition. One of the tournament favorites – Benjyfishy, MrSavage and LeTsHe – struggled on day two, having to fight another team at the Doom’s Domain point of location (POI). They landed in eighth place after 12 matches. Europe’s best teams came to play and delivered on an outstanding finale to Chapter 2 – Season 4.

The Team New Age trio – Reverse2k, Mero and Deyy – completed a thrilling wire-to-wire victory, leading on day one and finishing strong on day two. After ending day one with 128 points, the competition was still entirely up in the air with XSET Gaming’s Knight, Shark and Av in hot pursuit and Commandment’s trio not far behind. An impressive 80-point performance across the final six matches sealed the deal for TNA.

In total, Reverse2k, Deyy and Mero managed 208 points with no Victory Royales and 72 eliminations. Consistency was the name of the game for Reverse, Mero and Deyy as it was for the entire season. Ten of their twelve matches resulted in a top-ten finish. This team was one of only a few to qualify three times for heats before ultimately closing out an impressive victory. Team TNA will hold the Axe of Champions until the next FNCS Finals and take home $66K USD.

Commandment, Cented and Edgey stormed up the leaderboard late but could not overcome the TNA trio; they ended in second place with 184 points. Stark Industries natives Bugha, Avery and Jamper rounded out the top-three with 176 points. Zayt, Saf and Stretch achieved the most points of any other team on day two with 129; they finished in fourth place. Season X Champion – Zexrow, MackWood and Calc – managed a seventh-place finish.

The competition still going on, check back later for NA West’s results!

The South America/Brazil region came down to the two best teams in Chapter 2 – Season 4.  Qualifier 3 winners – Frosty, redlee and Kurtz – completed the ultimate performance in the Grand Finals. This trio managed three Victory Royales and an astounding 84 eliminations. With 251 points overall, Frosty, redlee and Kurtz convincingly took home first place, earning them the FNCS Champion crown for Brazil. Week one and two qualifier winners Rustyk, k1ng and Seeyun finished in the runner-up position with 182 points. 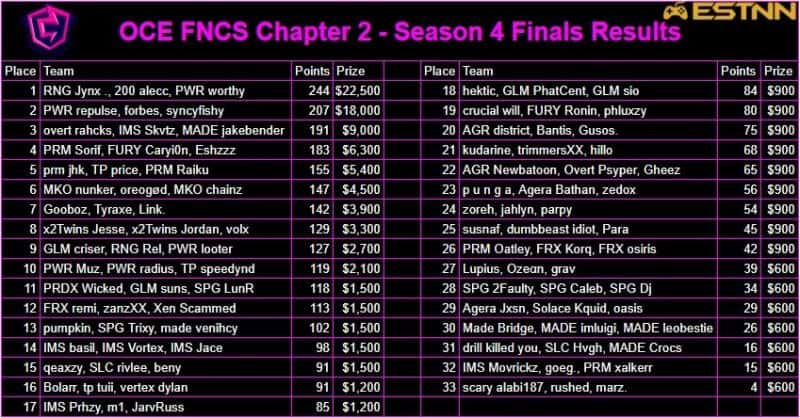 Week one qualifiers – RNG Jynx, PWR worthy and SRN alecc – completed an unprecedented stretch of consistent gameplay in the Grand Finals. This Aussie trio finished no worse than tenth in any of their 12 matches, with 71 eliminations and one Victory Royale. It was a historical performance, considering no team came close to eclipsing even 60 eliminations. Jynx and company knew exactly how they needed to play in the Grand Finals and flawlessly executed their strategy. With this victory, Jynx becomes the world’s only three-time FNCS Champion after winning Chapter 2 – Season 2 and Chapter 2 – Season 3. There’s no telling what Jynx will do next after consistent FNCS performances.

PWR repulse, forbes and syncyfishy made a valiant run on day two of the Grand Finals but ultimately fell short. These three put up 155 points over the final six matches, which brought them to 207 points. That effort was good enough for second place. Overt rhacks, IMS Skvtz and MADE jakebender took third place with 191 points.

Those who tuned into the Asia FNCS Finals witnessed history as Ruri and Maufin won their second straight FNCS Championship, this time with Bob. Some may remember that Ruri and Maufin won the Season X Championship with RizArt. After sailing quietly through the qualifiers, Ruri, Maufin and Bob earned 227 over the final 12 matches, including one Victory Royale and 79 eliminations. Despite winning four games, NSR Rainy, NSR みや and cr yuseaDragon finished with 196 points in second place. Two-time qualifier winners Qjac, WildHawk and naetor rounded out the top-three with 195 points.

ME – Tie-Breaker Atop the Leaderboard

The Middle East FNCS Finals came down to a tiebreaker between two of the region’s top teams. ASMR vagnaR, TU I4xPRO and TU Dexefite won in the end after earning two Victory Royales across the final 12 matches. They managed 202 points, tying with the two-time qualifier winners Sudor KuKi, Phoenix Mev and Wiz EpikNyle. Despite their outstanding consistency in the Grand Finals, they could not pull out any Victory Royales. That factor alone allowed vagnaR’s trio to edge out KuKi and his teammates to close out the Middle East region.

That concludes the sixth seasonal Fortnite Champion Series tournament. Stay tuned to ESTNN as we move closer to the DreamHack Duos event in November and multiple other competitions coming soon. Congratulations to all winners of FNCS Chapter 2 – Season 4!

Tfue reflects on being the most-watched individual streamer in 2019

The Roads Traveled: Inven Global’s 2019 Through the Lens