Fortnite could be unvaulting a weapon that’s powerful beyond measure

A Fortnite update hints at a weapon that Epic Games could be bringing back from the vault for players to dominate with once again. The weapon seems to center around the word ‘zapped,’ opening a few doors for the return of a powerful electrifying gun.

There’s an unreleased weapon named “Bad News”, here’s some text related to it:

Hypex leaked a few segments of text on Twitter. The manner in which this gun is talked about builds to a powerful weapon that may pack a punch in one mighty shot.

Fortnite’s unbenched weapon zaps back into the game

The Zapotron is likely what Fortnite is about to bring back from the vault. Unfortunately for this sniper rifle, it didn’t fit into the game’s meta and was taken out of rotation due to lack of support at the time,.

Capable of dealing 150 damage per shot, the Zapotron charges a round to fire after a few seconds. Since the addition of the Rail Gun, another charged weapon, the Zapotron could drop back into Fortnite to rival it.

Fortnite’s alien invasion brought new guns like the IO Tech weapons that advance the game’s arsenal with unique features. The Zapotron plays into the alien theme with its charge shot and disintegrating potential that might soar to be one of the best weapons. 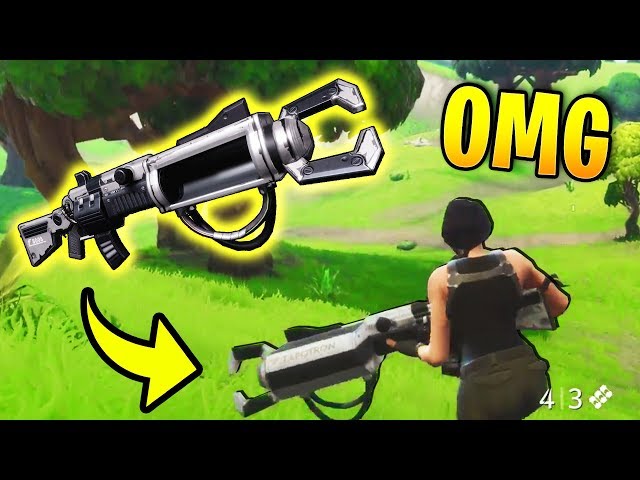 Before, the Zapotron’s ammo could only be found in loot drops that land across the map at random points, so it’ll be interesting to see how its brought back. The Cell Ammo it uses is similar to how the Radar Scanner uses unique ammo, possibly tying it into the IO Tech weapons.

Fortnite’s meta turned upside down when Season 7 hit, so the return of a vaulted weapon like the Zapotron isn’t that hard to imagine. It could fit in well with the weapon pool due to its high damage and similarity to other weapons.

The Zapotron dealt insane damage if a shot could be landed, almost breaking the game for the short period of time it was out. Now that the meta can support it, players may use it to completely demolish anyone in their path.

Be wary of the gun’s return, as it can blast players off the map with its powerful charged shot. The flying UFOs might also be some of the first victims, possibly balancing the game or turning it into a new world of chaos.