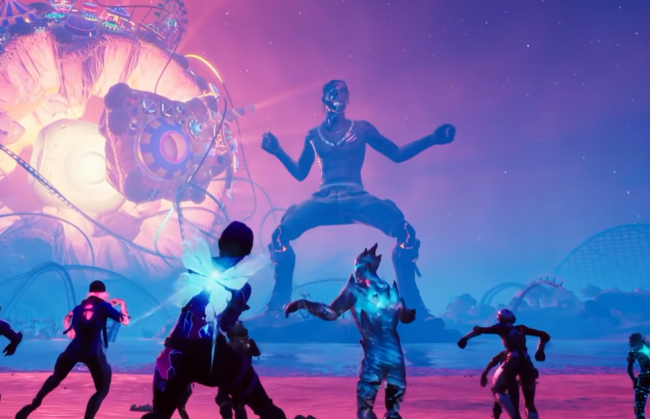 Fortnite’s dedication to appeal to pop culture has seen numerous fruits. Aside from the previous skins seen in the game of popular heroes, and marvel characters alike, there were even some other interesting additions to the game.

Back in December 2, 2020, Travis Scott reportedly had put up enough merchandise sales that earned him $20 million, according to an article by NME. What’s even bigger is the previous announcement by Fortnite that the musician would have a virtual concert in game on April of 2020. Due to the ongoing pandemic, artists have tried to become more creative with how they can do concerts. Travis Scott, was able to have a virtual concert within the game that showed how music and games could mix together creating an interesting concert so full that players reportedly had a hard time joining.

In a recent announcement made by Epic Games, the Icon Series was introduced. It would reportedly bring together music, gaming, film, and even fashion within the Fortnite Icon Series. This would bring personality, artistic vision, and even the attitude of other top creators to Fortnite. This was reportedly building on some previous collaborations along with Major Lazer and Marshmello.

According to certain tweets made, Travis Scott could reportedly come back tonight since he is reportedly part of the game’s Icon Series. However, nobody was able to confirm the information yet. The leak was according to ShiinaBR known as a prominent Fortnite leaker.

Speculations regarding Travis Scott’s return note that he might be having his very own tab. This is still up for not just debate but for serious confirmation due to the shifting finality of the tabs especially when it came to Ninja. An article by DBLTab covers the possible return of Travis Scott to Fortnite this 2021.

Travis Scott COULD come back tonight since he’s part of the Icon Series, but nobody is able to confirm it 100% yet!

Read Also: Fortnite x Travis Scott Guide: Where to Dance at Apres Ski or The Yacht? Plus Astro Head Locations

Is the Fortnite leak believable?

While the article was previously published on February 22, it tackled a speculation that turned out to be untrue. The article detailed speculations about a possible return of Travis Scott back in February 10 which apparently did not happen. This showed that it wasn’t actually the first time that Travis Scott was rumored to return to the game itself.

A Fortnite informant back in March 5 published a tweet saying Travis Scott would return to Fortnite due to it being considered “Travis Scott ” day in certain places. While this proved to be untrue, it was still pretty interesting to think of his return to Fortnite. Since the first rumor back on February 5 didn’t really turn out to be true, it might be hard for some fans of Travis Scott and the game to really believe that Travis Scott will be returning to the game yet again.

Travis Scott *MIGHT* return on February 10 because that’s considered the Travis Scott Day in some places!

Another reason why it might be hard to believe is due to the lack of official information provided and no sign from Epic Games themselves. Although there are instances where Epic Games does not announce a new addition before it hits the game, it would be quite hard to believe that a person as big as Travis Scott would join the game without proper introduction.