“Fortnite” has concluded another season with a magnificent event where players actually battle Galactus, Marvel’s big baddie, live on the map, and ending the villain by driving a bus filled with explosives straight into its mouth with the help of featured Marvel superheroes during season 4.

(Photo : Fortnite / Facebook)
After the epic finale of season 4, “Fortnite” season 5 is here with The Mandalorian and Baby Yoda.

By the start of “Fortnite” season 5, Agent Jones, who appeared at the end of the Nexus War, gathered all the hunters from different realities, including The Mandalorian and Baby Yoda.

As per a previous report by Tech Times, it has been leaked that The Mandalorian skin is coming, alongside the adorable Baby Yoda, and as it turns out, the leak is indeed accurate, and players can get the skin at level one of this season’s Battle Pass.

According to PCGamesN, much like with the Marvel skins and the Awakening Challenges, players will have to complete a series of quests to upgrade the armor.

For this week, the first Mandalorian quest involves locating the Razor Crest, which is the Mandalorian’s crashed gunship.

Read More: ‘Fortnite’ Server Down for How Long? Players Won’t be Able to Play Until Season 5 Starts and It’s Intentional!

Where to Find the Razor Crest

There are quite a few changes with this season’s “Fortnite” map, and it can be a little hard to locate the ship since it’s in an unmarked location, but all you need to do is land in Colossal Coliseum or somewhere near it and go southeast.

The gunship should be stranded on top of the hill, and all you really need to do is show up near the ship to unlock the first Mandalorian skin upgrade.

Here’s where you specifically need to go: 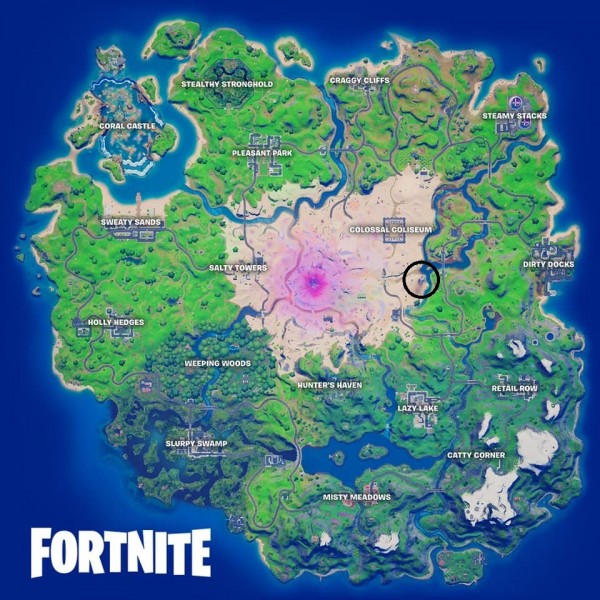 (Photo : Fortnite)
Here is the exact location of the Razor Crest.

However, a word of reminder: it turns out that The Mandalorian himself is guarding the ship, and you need to defeat him rather quickly or else he would take you out much quicker with his sniper rifle: something he uses quite efficiently.

According to Forbes, defeating The Mandalorian allows you to take the sniper rifle, a Mythic weapon that you can use to beat other “Fortnite” players.

The Mandalorian also carries a jetpack that you can snag once you defeat him.

This season’s Battle Pass includes a few other skins that you might want to get, such as Mave the shapeshifter and the Mancake.

In related news, the recently concluded season finale of “Fortnite” season 4 has broken the game’s previous record, becoming the biggest event the game ever had with more than 15.3 million concurrent players, as per The Verge.

It beat the record of Travis Scott’s “Fortnite” concert that took place in April, which had 12.3 million concurrent players during the first show.

The finale of the last season of Chapter 1 also racked in millions of players, so it’s not surprising that huge events such as finales and concerts in-game have brought in this many players.

After the epic war with Galactus, “Fortnite” was down for a few hours to prepare the game for season 5, which is normal and has always happened every time a new season is about to launch.

There will be more quests in the future as “Fortnite” season 5 continues, so stay tuned.