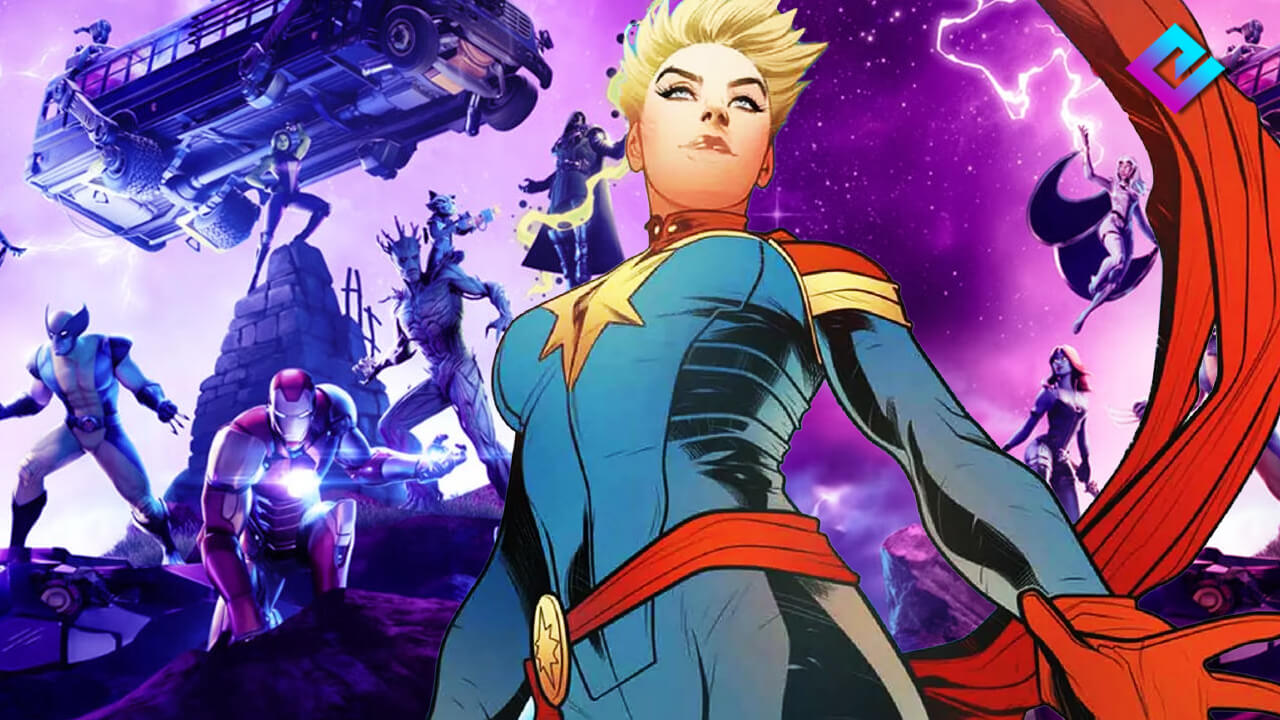 Epic Games looks to be getting ready for the next major downloadable update in Fortnite Season 4, and we could see a new superhero drop as part of it. There was a recent Fortnite Captain Marvel leak that has reportedly revealed that the powerful superhero could be the next to drop.

The reveal of this new Fortnite Captain Marvel leak comes via the Reddit user ShookPA who posted about the character potentially coming to the game on the Fortnite battle royale sub-Reddit page. The user noted that some new powers have appeared in the game’s backend.

They posted a video clip of the actual game in action, showcasing the new powers and the file names that hint at Captain Marvel appearing in battle royale soon. In the video clip, the user roams around a blank space to test various powers and features.

There are different circles on the ground, with various powers and abilities accessible by touching them. Floating above the actual powers are the names of the files that contain each of the various powers. None of the file names give away Captain Marvel as they each have codenames.

But it is the powers themselves that potentially give away this Fortnite Captain Marvel leak. The player goes over the first power that happens to be a specific particle and portion of the fireball power. The fireball power seems to be the general superhero ability that will be released.

Each of the various powers that the user goes over are different particles of the fireball power. They are likely just different sections and animations for the overall fireball power that will make up its use in combat, so we can’t see it in action just yet.

Some particles have the file names for them in the game, but you can’t see what they look like yet. This is possible because the full files for the fireball ability haven’t been added to the game at this time and will require a future update.

We know from the file names that some of the particles are labeled as “charge” particles. This could indicate that the fireball ability or whatever it ends up will allow the user to charge it up by holding down the trigger or button and then sending out a potentially stronger version.

The fireball requires a charge to use or hold it down to better aim at the opponent. It is unknown, but it does seem that the fireball ability will be powerful and useful. As for how this is a Fortnite Captain Marvel leak, it has to do with the character’s name.

The name of the character that is attached to the powers is Cherry. There isn’t a Cherry superhero, so this is likely just a file codename for the Marvel character who uses it to keep their identity a secret.

Captain Marvel does happen to start with a “C” as well, which already ties the two together. The fireball ability seems somewhat similar to the lasers and blasts that she can send out from her hands in the comics and movies.

The Fortnite Captain Marvel leak indicates that the powers are all but ready at this point so we should see her release soon. We wouldn’t be surprised if she released in battle royale in the next downloadable update.

That could happen this week or the next, which could mean that you won’t have to wait too long for her to show up in Season 4. The question remains if she will be the next boss to fight on the battle royale island or if she will have superpowers for you to collect in the game.

There aren’t too many female bosses for players to fight in Season 4, so it would make sense to have her join Iron Man, Wolverine, and Dr. Doom as one of the characters you can take out to steal her powers. But does this mean that she would come with her own named location as well?

That is something that we will have to wait and see about. We do not know for sure that the Cherry character is even referring to Captain Marvel. There is a chance that it could be referring to Crystal, another superhero who has similar powers.

But given the fame of Captain Marvel and that we have seen her teased in official Fortnite artwork before, it is unlikely that it is Crystal in this situation. Codenames have been used in the past for previous heroes like Tony Stark, Silver Surfer, and others released after the Season 4 launch.

When Captain Marvel does reportedly release in the game, expect to use her powers in battle and likely in the Marvel Takeover game mode, and pick up her skin likely in the item shop with V-Bucks. Stay tuned for official confirmation of her soon.