Competitive Fortnite’s FNCS All-Star showdown finalè is rapidly approaching. The festivities began early this week with players across all regions battling in skill challenges to determine the best editors, builders and aimers. Those tournaments, while fun, were ancillary, and the primary focus is on the upcoming Solo Championship.

Six games will determine how the leaderboard shakes out and who wins a sizable share of $3M USD in each region. Europe, in particular, features legendary competitors such as TaySon, MrSavage, benjyfishy and more. Most of the players involved have achieved an ideal placement in solos. They have a chance to grow their legacies in this, the first significant solo event in some time.

Today, ESTNN breaks down the essential factors of the European Solo Championship. We’ll outline the favorites, dark horses and analyze some of the intriguing storylines. Check out our NA East preview as well to better understand the field and other critical factors ahead of the event.

Many believe Europe to be the most challenging region to compete in without question. It’s hard to argue that, considering what we’ve seen over the past few years. All players involved in the Solo Championship could very well win, and the skill gap might be much narrower than it seems. Regardless, winning Fortnite tournaments is complex, and it’ll take an outstanding and consistent effort mixed with some luck to accomplish that feat.

Here is a view of the current EU drop map per @gingabtw on Twitter. It’ll help you better understand where all of the finalists are landing and who they could face in early-game fights. 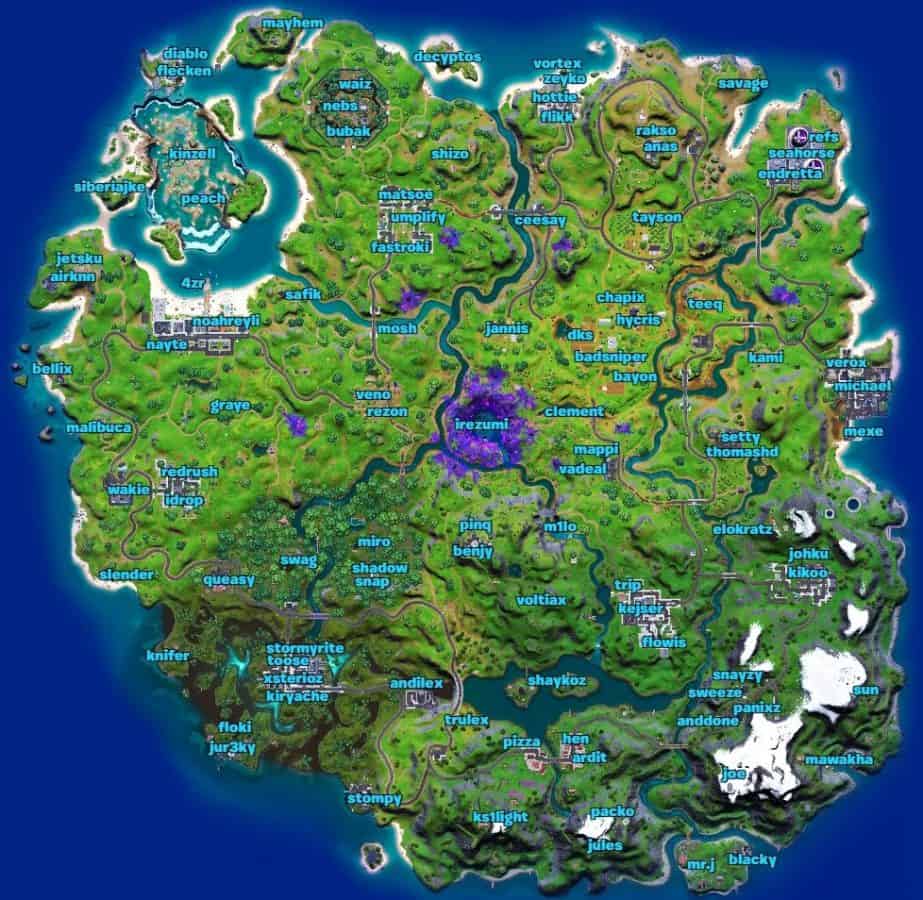 Guild Esports player Hen leads the way when talking about favorites in this unbelievably stacked European field. The last year of Hen’s career is nothing short of outstanding. Apart from winning an FNCS title, Hen manages to lurk regardless of the tournament, format and season. It’s easy to forget that Hen finished tenth in the FNCS Invitational and fourth in FNCS Chapter 2 – Season 3, both of which were high-tier solo tournaments. The young English superstar is undoubtedly a generational talent who could very well secure this weekend’s Solo Championship.

The solo master himself — 100T MrSavage — was a lock to make the list of favorites from the moment Epic Games announced this tournament. His track record in solo competitions speaks for itself; a win at DreamHack Anaheim, 15th in FNCS Invitational, solid DreamHack Open results and countless Cash Cup victories. While his mechanics and aim are fantastic, MrSavage possesses intangibles such as a strong mentality that some other players fail to maintain.  The Solo Championship is a prime spot for MrSavage to shine with an uncontested drop and perhaps the biggest brain in all of Fortnite.

Two-time FNCS Champion Guild TaySon looks prime to claim his third title, given his consistency from season to season. He claimed the Axe of Champions as a solo back in Chapter 2 – Season 3 and continuously plays well in all formats. Like MrSavage, TaySon does not waver under pressure. All signs point to an uncontested Orchard drop, which could be all TaySon needs to run away with the competition. The Slovenian has all the tools needed to win any tournament he enters.

While DreamHack seems to better suit his game, we cannot ignore teeq’s accomplishments as a solo. The Polish player has built his career on solo results dating back to the Fortnite World Cup in 2018. Since then, teeq is one of only a few players to claim two DreamHack Open titles in the COVID-era. He’ll have a portion of the Kami Split to himself, and there’s plenty of reason to believe that teeq could find his way to the top of the leaderboard.

Slovenian player K1nzell is a long-time veteran who has stood the test of time. Like teeq, k1nzell holds two DreamHack Open victories as a solo. He can comfortably wear the title of a “crafty veteran” who is capable of winning any tournament provided he holds it together for six matches. While K1nzell’s choice to land Coral Castle could work against him, it might not matter if he manages to outplay his opponents in these stacked lobbies.

Rising star Veno has a lot to prove coming off of a disqualification in last season’s Fortnite Champion Series event. An unfortunate purchased account situation eliminated his trio from the pool, which forced him to compete in the FNCS All-Star Showdown Play-In competition. Veno secured a second-place finish and has all the momentum he could possibly want ahead of the Solo Championship. He should encounter fellow top player rezon ay at Boney Burbs, which could pose an issue. If the two play smart and avoid each other, Veno might find himself in an advantageous position.

Craggy Cliffs appears to be the most contested drop in the European region. Four players plan to land there and none have any clear connections to one another. Almost all other POIs seem to have some sort of collusion involved. For example, stormyrite, Toose and Kiryache are all aiming for Slurpy Swamp, the same place they landed as a trio. European players have no shame in fighting each other off the spawn to stroke their own egos, so expect a lot of chaos in this regard.

Feel free to check out our viewing guide, where we include broadcast and Twitch Drop information for this weekend’s exciting All-Star Showdown conclusion!