One of the most popular games of 2020, Fall Guys, is now under the Epic Games umbrella as part of a new acquisition by the Fortnite developer.

Like Fortnite, Fall Guys was introduced as a new spin on the typical battle royale formula and it has been able to sustain a sizable audience after reaching meteoric heights.

You might remember than in February, news leaked of a potential Fall Guys and Fortnite crossover, and now that looks like it’s much more of a possibility with this new partnership.

Nothing will change about Fall Guys and you’ll be able to continue playing it as normal. It’ll actually be getting a few upgrades with this announcement as the developers revealed they would be working on bringing cross-play, account systems and squad vs. squad modes to the game.

However, Epic Games CEO Tim Sweeney’s comment about the metaverse could be the most interesting thing to pay attention to.

It’s not a surprise that Fortnite has been becoming a haven for much more than just fans of battle royales. Recently, we’ve seen things like concerts, short films and just all out parties in Fortnite, showing it’s for more things than just a game.

That is what makes the growing metaverse that much more important.

Gonna earn all the Crowns in @FallGuysGame now! Welcome to the Epic Family @Mediatonic and FallGuys 🎉 https://t.co/EjXDjPIMyB

In the official announcement of this acquisition, Sweeney has an eye-opening comment of what to expect with this move.

“It’s no secret that Epic is invested in building the metaverse and Tonic Games shares this goal,” said Sweeney. “As Epic works to build this virtual future, we need great creative talent who know how to build powerful games, content and experiences.”

What this actually means is still up in the air, but it sort of sounds like the Fall Guys universe will be integrating with Fortnite’s. Whether that means the two co-exist in the same world remains to be seen, but we’ve already seen the types of crossovers that can happen with Epic Games properties.

Rocket League and Fortnite have collaborated a few times with cosmetics, so we expect to see Fall Guys do the same.

With Fortnite branching into both the Marvel and DC universe, there’s really now limits to where they can go. 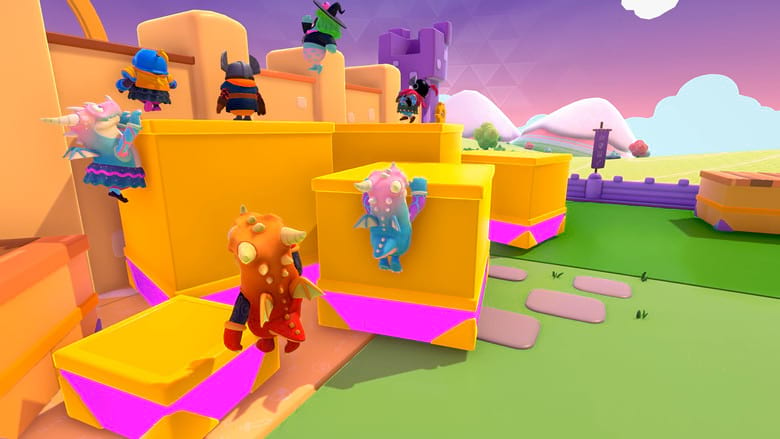 Devolver DigitalThe beans are taking over!

This news pretty much confirms the leak that Fall Guys was getting a set of Fortnite cosmetics, but what does that mean for somebody who wanted to get their hands on some cosmetics in Fortnite?

It would be quite difficult to make a bean-like skin in Fortnite considering the proportions of the characters. Beans aren’t exactly known for their size, so instead of an actual skin, perhaps Epic could decide to go the back bling route.

This would make a lot more sense as you could get the actual bean in the game without having to cut any corners. Nothing is confirmed as of yet, but it does seem quite logical considering the popularity of both games.

We’ll let you know when we know more about a potential crossover. For the time being, we’ll just have to speculate about what impact Fall Guys will have on this growing metaverse.