As Fortnite Chapter 2 Season 7 rolls on, players are eager to see what awaits the battle royale. There have already been some massive changes to Fortnite with Aliens taking over, new lore to discover, a slew of new Alien-themed weapons, cosmetics, and more to use.

That was just the beginning, as Chapter 2 Season 7 isn’t stopping with the craziness. One thing fans love about Fortnite is speculation and leaks. There are plenty about the ongoing season.

The leaks about Coral Castle are starting to come to life. This Fortnite POI is seemingly being abducted by the Mothership. All signs point to it being absolutely destroyed, with multiple craters in the location. It is only a matter of time.

The same goes for Corny Complex. A leak has revealed that pieces of this Fortnite POI will be sucked up into the Mothership as well. A large chunk of terrain from Corny Complex, according to leaks, will be removed by the UFO and drastically change the location.

I just discovered the BIGGEST #Fortniteleaks in S7!!

An IO monitor shows a small mini map AFTER Coral is destroyed. It ALSO shows that the ocean has DROPPED and it LOOKS like the rivers are dry.

These map changes are nothing to laugh about. This is some serious business when it comes to switching up the scenery in Fortnite. With Coral Castle ready to be destroyed, leaks suggest the rivers will dry up and expose brand new areas for players to explore. 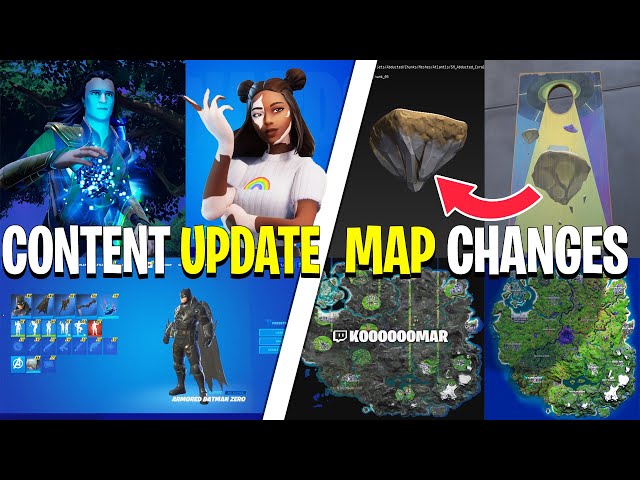 YouTuber Happy Power touches on the leaks previously mentioned and so much more. Check it out to get more in-depth information about the leaks. Of course, take every leak with a grain of salt until anything officially happens in Fortnite.

Aside from the map changes, Happy Power discusses recent leaks about skins and sounds too. Armored Batman Zero and different concepts are a large portion of the video’s discussion.

He also goes over new cooldown sounds for weapons, potential collaborations in the future and even more crossovers with DC Comics and Batman. Epic Games clearly has plenty in the pipeline for Fortnite now and in the future.