The alien invasion in Fortnite’s Chapter 2 Season 7 came along with a fresh series of skins, quests, and game changes for players to discover. One particular feature is the Fortnite Alien Artifacts scattered throughout the Fortnite map that allow players to customize their new skin, Kymera. 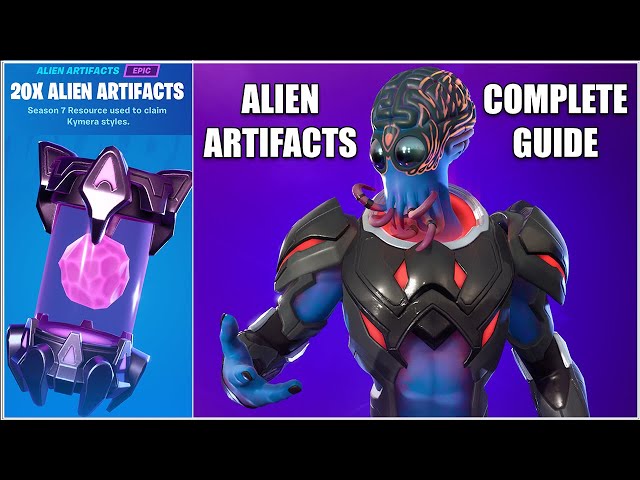 Kymera resembles an alien that impacted with Season 7 who holds some of the highest customization options of any skin in the game. Almost every aspect can be altered to the player’s favor, from the head to armor to skin.

Alien artifacts can be collected to unlock new customization options for Kymera, and new locations drop each week for players to find. Fortnite’s alien universe shakes things up a bit with these artifacts, and here’s where to find them.

Players can start at Believer Beach to find the first Artifact of Week 2 in Fortnite’s Season 7. Head west towards the coast until a structure with a satellite on the roof is visible upon a hill overlooking the ocean in the top left area.

The artifact should be on top of this building or in it, easy to find with a little exploring.

To the northeast of Pleasant Park, players can find a structure near the spire that overlooks Fortnite’s friendly neighborhood. In relation to the spire, the building is just below it to the left.

There isn’t much hiding space for the second Artifact, so players should be able to find it relatively quickly.

The third artifact of Fortnite Week 2 lies south of the Corny Complex, near the bridge that connects the road to Dirty Docks. The artifact hovers on the north side of the river to the right side of the map.

It should be relatively easy to spot with a closer inspection.

Almost directly above Retail Row lies a square-shaped building adjacent to a power line tower. The fourth Artifact appears to rest just to the right of this structure, possibly outside.

Retail Row sees some heavy traffic, so be prepared if you’re looking for this Artifact.

Straight up from Misty Meadows sits two islands in the center of a lake, one with a bridge and one without. The final Artifact rests on the edge of the left island, the one with a bridge linking it to the mainland.

There is a building on the left side of this island near the water, the Artifact spawns just to the upper right of it.

The Real Reason These Game Skins Were Banned Or Removed