5 most disliked collaborations in Fortnite history

When it comes to collaboration in Fortnite, not all of them work out. Some, like Samus Aran, failed due to licensing issues, while others just didn’t make it past the whiteboard. Nonetheless, not all collaborations that get approved are loved by the community.

Certain collaborations over the years have failed to gain a foothold within the Fortnite community for various reasons. Be it bad cosmetics, lack of originality, or simply not fitting into the storyline itself. Irrespective of this reason, these collabs have faded into the annals of Fortnite’s history.

Without further ado, it’s time to take a trip back in time and look at the collaborations that never really hit it off with fans. 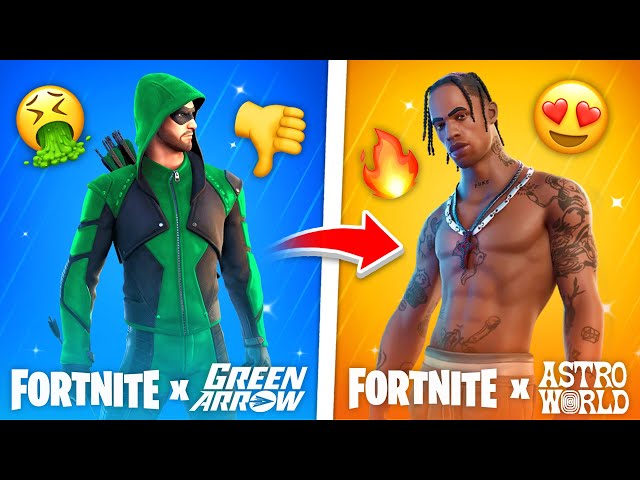 Despite the theme, and given Fortnite’s “anything goes” attitude, the Tron collaboration faded into obscurity as fast as it had appeared. Seldom do players even speak or mention the collab, as most have forgotten about it.

Although the collaboration was short-lived, some fans acknowledge that if more effort had been given, Tron would have been a very good fit for Fortnite. It’s left to be seen if Epic Games will do anything about it in the future

Yeah, the ghostbuster skin is not that good. But the proton pack back bling is pure magic, I love it.

While not a lousy collaboration in Fortnite, according to fans, the cosmetics for the Ghostbusters were rather plain and given the price, it didn’t do much justice.

The only rad takeaway cosmetic from the entire crossover was the amazing Proton Pack Back Bling. While purely cosmetic in nature, the design esthetics fit perfectly into the wacky world of Fortnite.

as someone who loves Green Arrow, I think his design was extremely lazy. I would’ve preferred a design more sccurate to the final seasons of the show or at least a brighter, more comic accurate take on Green Arrow. it just seemed so lazy & i hope they do Loki justice.

According to many fans, Green Arrow’s design was lazy.

Despite the character being very popular on the TV Series, players can seldom see it being worn in-game by players.

Fortnite allowed a streaming service to stream their stuff in-game on a large screen. However, that ended as soon as the company filed for bankruptcy.

Nonetheless, for most players, the highlight of this collaboration was blocking the screen and pelting tomatoes at it. This was due to the horrendous content that was being shown.

Could this even be considered a collab ? it’s definitely the most disappointing if it is. everyone hyped up a skin that never came

While the community keeps debating as to whether this was a collaboration or not, without doubt, the red balloon tied to a sewer entrance left hundreds of fans disappointed. This was after they realized that nothing was going to happen.

To this day, no one knows exactly what went wrong and why a full-fledged collaboration never came to fruition.