5 fan-made designs that were actually added to the game

Epic loves to implement various cosmetics, in-game items, and other components for Fortnite that were created by fans.

The developers maintain perfect harmony with fans by adding customized items to the game. Fortnite has been on the market since 2017, and on numerous occasions, Epic has added items to the game that were entirely created by loopers.

Some of these items and cosmetics continue to be fan-favorites years after they were first introduced. The Fortnite community has not only developed cosmetics and skins but has also helped the developers implement new POIs as well.

This article will dive into 5 fan-made designs that were added to the game.

Some of the best in-game Fortnite items created by loopers

Graphic designer Rex Stylus, who goes by the username RexSadio on Reddit, designed one of the most popular Fortnite cosmetics ever. The designer designed a muscular humanoid cat that was ready to take on enemies in an instant.

Epic loved the concept and added the skin as one of the cosmetic rewards from the Chapter 2 Season 2 Battle Pass. The Meowscles skin went on to become one of the most popular BP skins ever in Fortnite.

During the early days of Fortnite, the game used to pack an Emote Wheel that only had six slots for the emotes. However, a reddit user suggested that the format could be changed and new slots could be added by introducing several pages and maneuvering between them using the mouse or keyboard controls.

The idea was picked up by Epic and implemented into the game. Loopers can now experience a variety of emotes that can be accessed easily. 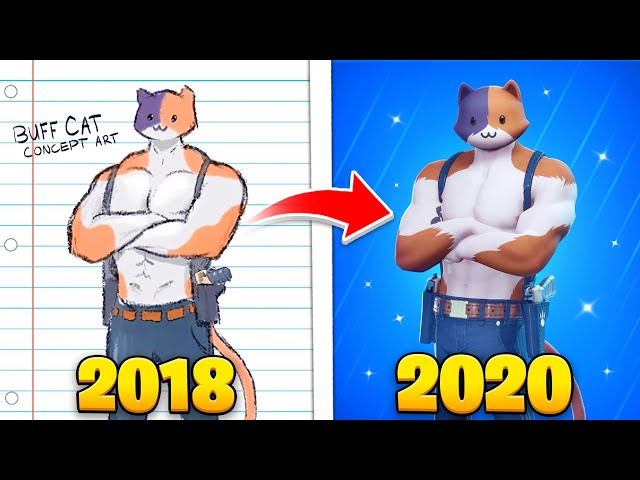 The Fortnite community not only contributes to cosmetic designs, but also designs POIs that were added to the game.

A reddit user named Blorfie designed a concept POI named the “Haunted Hills“. The POI consisted of two hills joined by a brudge and castles on top of each of the hills. The POI also had a huge lake in between the hills.

The concept was well received by the Fortnite community and Epic took note of it. The developer introduced it as a POI in the game. However, there were minor changes that were implemented.

The Chicken Trooper concept was drawn by an eight-year-old boy named Connor. The concept art was loved by members of the Fortnite community. A popular artist named Etsy Turtle developed the character and gave it a proper outlook.

Epic was quick to note this and the Chicken Trooper was added to the game as the Tender Defender.

Fortnite Chapter 2 Season 2 introduced the character of Midas who went on to become one of the most popular characters in the game. One of the artists named Kitsu designed a female version of the Midas.

The concept art was so influential that Epic decided to add it to Fortnite without making any changes.